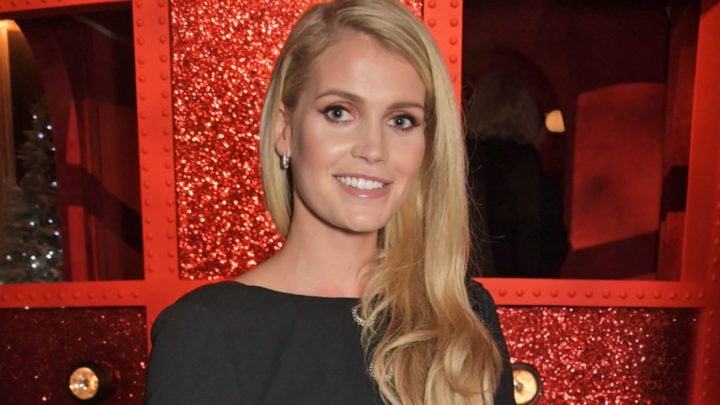 Lady Kitty Spencer is rumoured to be engaged to her millionaire lover who is 32-years her senior. According to multiple reports, the 29-year-old niece of the late Princess Diana is set to marry fashion designer Michael Lewis, 60.

British tabloid The Sun first reported the news over the weekend, claiming that the multi-millionaire – who turns 61 this month – popped the question to model Lady Kitty shortly before Christmas.

The couple are thought to have been dating since May 2o18 after they were spotted out and about together in New York City. Their romance bloomed after Lady Kitty split from property mogul Niccolo Barattieri di San Pietro, 48, in 2017.

While Lady Kitty has not yet confirmed the news, a friend previously told the Daily Mail that the South African father-of-three is “loved by all of her family”.

I am very grateful to have such kind and talented friends. Thank you my dearest Domenico and @stefanogabbana for the most phenomenal hand-painted Alta Moda @dolcegabbana dress. Thank you @bulgariofficial for the most exquisite jewellery. I am very lucky to be part of your family. Thank you to the most special, wonderful man @philiptreacy for creating such an elegant headpiece. I'm in awe of all of your craftsmanship and creativity. I am truly appreciative for all of the time and effort that went into my outfit for such a happy, special day yesterday.

The fashion model, who was born in the UK but raised in South Africa, is the eldest of five children and her parents are Earl Spencer, the younger brother of the Princess of Wales, and former British model Victoria Aitken.

Despite being raised overseas, she remains close to her cousins Prince William and Prince Harry and famously attended the wedding of the Duke and Duchess of Sussex in 2018.

Lady Kitty made headlines for a very different reason last month though as a throwback photograph she shared on social media caused a flurry of excitement among royal fans, who claimed that the fashion model is the double of Princess Charlotte.

29 🎂 Thank you for such beautiful and kind birthday messages today 💗💗 I couldn’t have asked for a better day surrounded by the people I love ☀️🙏🏽 Thank you to everybody who made it the most special birthday I can remember (although this Barbie party looked pretty cool too!) 💗

Kitty shared a sweet image in celebration of her 29th birthday which showed her as a child playing happily with her Barbie, with a table of delicious treats and lollies surrounding her.

“Thank you for such beautiful and kind birthday messages today,” she wrote alongside the image. “I couldn’t have asked for a better day surrounded by the people I love. Thank you to everybody who made it the most special birthday I can remember (although this Barbie party looked pretty cool too!).”

It didn’t take long for royal fans to notice to similarities to another member of the family though, and the model was inundated with comments from people both wishing her well on her birthday, but also claiming she was the spitting image of the four-year-old daughter of her first cousin Prince William.

It wasn’t the first time fans have noticed similarities between the two though as Lady Kitty was previously compared to her young royal relative after she uploaded a sweet childhood photograph to her social media account which sparked a flurry of comments from those who couldn’t believe how much she looked like Charlotte.

The cute photo showed a young Lady Kitty, dressed in full riding gear, sitting astride a white pony as she looks over her shoulder into the distance.

Have you been following this story? Do you think Lady Kitty resembles her late Aunt?