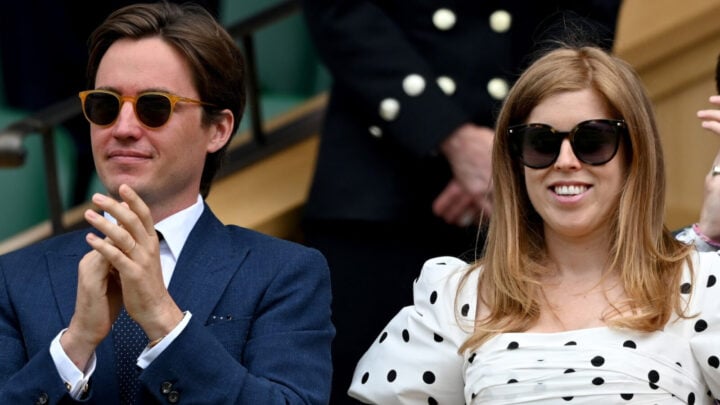 Princess Beatrice and her husband, Edoardo Mapelli Mozzi, who are expecting their first child later this year, enjoyed a day out at Wimbledon on Thursday, and the 32-year-old mother-to-be is absolutely glowing!

Beatrice dressed her baby bump in a white Self-Portrait dress with black polka-dots. The gorgeous outfit featured puff sleeves and a ruched bodice, before billowing out into a longer skirt. Beatrice coordinated the outfit with a pair of stylish sunnies, while she wore her strawberry-blonde locks in a casual blowout look. It’s not clear how far along the princess is but she’s definitely showing! Meanwhile, Edo, as he’s known to friends, looked smart in a navy-blue suit.

Beatrice married Edoardo on the grounds of Windsor Castle in July, 2020. The pair had originally planned to marry on May 29 in the Chapel Royal at St James’ Palace, but the ceremony was postponed because of Covid-19 restrictions. Beatrice is already a step-mum to Edoardo’s five-year-old son Christopher Woolf, from his relationship with American architect Dara Huang.

Beatrice’s aunty, Sophie, Countess of Wessex, was also pictured at the tennis tournament on Thursday, with the pair even sitting together at one point. The 56-year-old looked super chic in a sheer, dotted dress by Me+Em. She even sported a new hairdo! Sophie swapped her usual low ponytail for a more relaxed, wavy style. The mother-of-two topped off the outfit with a white clutch, minimal jewellery and a tartan blanket to throw across her legs.

Meanwhile, earlier in the week, Beatrice’s first cousin Zara Tindall was pictured at the tennis tournament with her husband, Mike. Princess Anne’s daughter, 40, who recently welcomed her third child, a baby boy, into the world, looked as stylish as ever in a chic navy and white shirt dress, which she paired with navy lace-up wedges. She wore her blonde bob out straight and accessorised with a simple navy cross-body bag. Meanwhile, Mike looked smart in a pale blue jacket with dark trousers, a white shirt and patterned tie.

Are you a fan of Princess Beatrice and Sophie Wessex?