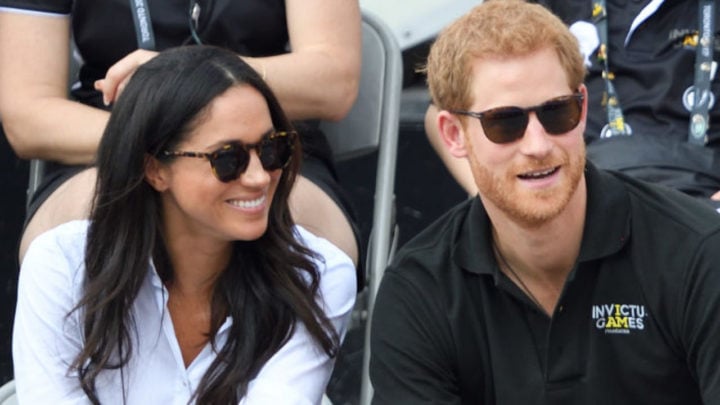 The Duke and Duchess of Sussex launched their new 'Sussex Royal' website after quitting as senior royals. Source: Getty.

After announcing their exit from the senior ranks of the royal family last month, the Duke and Duchess of Sussex wasted no time in unveiling their brand new ‘Sussex Royal’ website which outlined their desire to establish a new life for themselves in North America and become financially independent.

Now though, it appears the couple could have hit a speed bump as reports out of the UK suggest that Her Majesty the Queen is planning to block the couple from being able to promote the brand, on the basis that they should no longer be able to flog themselves as royals.

The Daily Mail is reporting that the Queen, following discussions with senior palace officials, has decided it is no longer appropriate for the Sussexes to use the word royal in their branding, following their shock exit from the front line of the firm earlier this year. However Buckingham Palace has not yet confirmed the reports.

The alleged decision comes after Harry and Meghan splashed out on a brand new website which heavily features the Sussex Royal branding, including in the website address, and follows the aesthetic of their hugely popular Instagram page, which is where they plan to make major announcements going forward.

The couple also applied to globally trademark the term for use on products such as clothing and stationery, as well as campaigning and charitable fundraising.

The duke and duchess, who are currently living in Canada with young son Archie, first used the Sussex Royal brand in April 2019 when they split from the household of the Duke and Duchess of Cambridge and launched their own Instagram account.

Since then the page has amassed more than 11 million followers and has played host to a number of important announcements, including Meghan’s pregnancy, the subsequent birth of Archie Harrison and, more recently, the couple’s decision to step back from their roles as senior members of the royal family.

“After many months of reflection and internal discussions, we have chosen to make a transition this year in starting to carve out a progressive new role within this institution. We intend to step back as ‘senior’ members of the Royal Family and work to become financially independent, while continuing to fully support Her Majesty The Queen. It is with your encouragement, particularly over the last few years, that we feel prepared to make this adjustment. We now plan to balance our time between the United Kingdom and North America, continuing to honour our duty to The Queen, the Commonwealth, and our patronages. This geographic balance will enable us to raise our son with an appreciation for the royal tradition into which he was born, while also providing our family with the space to focus on the next chapter, including the launch of our new charitable entity. We look forward to sharing the full details of this exciting next step in due course, as we continue to collaborate with Her Majesty The Queen, The Prince of Wales, The Duke of Cambridge and all relevant parties. Until then, please accept our deepest thanks for your continued support.” – The Duke and Duchess of Sussex For more information, please visit sussexroyal.com (link in bio) Image © PA

The news comes after Harry and Meghan axed all 15 members of their UK staff, providing the biggest hint yet that they have no intention of returning to live in Harry’s home country. Among those who lost their jobs were the couple’s newly appointed private secretary, Fiona Mcilwham, along with their head of communications Sara Latham.

Despite this, Frogmore Cottage will remain the couple’s main UK residence after the Queen announced that they would be allowed to keep the property following ‘Megxit’. The property, in Windsor, was gifted to the Sussexes by Queen Elizabeth as a wedding present, in line with royal tradition.

However as part of the deal – and following a backlash from the British public – the couple agreed to pay back the £2.4 million (AU$4.6 million) of public funds that was spent on refurbishing the lavish home ahead of Archie’s birth last May.

Do you think this is the right decision?