“Please look after this bear”: Camilla snapped with thousands of the Queen’s Paddington bear tributes 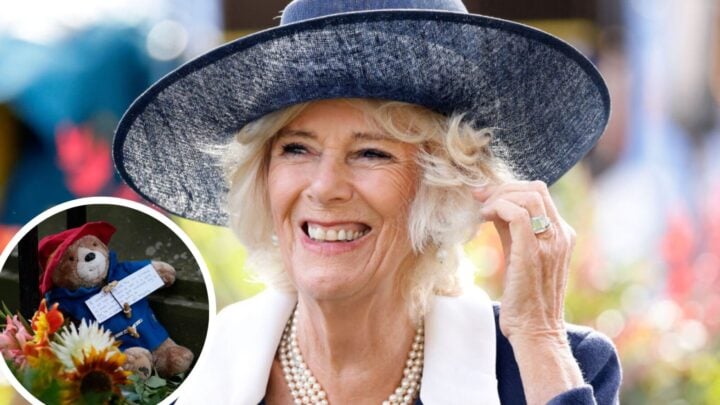 Queen Consort Camilla has revealed the Queen's Paddington Bear tributes will be donated to a children's charity. Source: Getty

Following Queen Elizabeth II’s death in September, many gifts and tributes were left outside the gates of Windsor and Buckingham Palace, but it was one cuddly character who truly dominated the streets- Paddington bear.

Among the sea of floral tributes left outside the Queen’s homes, members of the public have also paid their respects in the form of the beloved teddy, who had become linked to Her Majesty after the pair starred together in a heartwarming comedy sketch for her Platinium Jubliee celebrations.

Now, Buckingham Palace has confirmed that all of the Queen’s teddies have been gathered, professionally cleaned, and are being “well looked after” by Camilla, Queen Consort.

The Palace has also released a photograph of the Queen Consort surrounded by a thousand varieties of Paddington bear teddies, to mark the 64th anniversary of the publication of the first Paddington bear book.

In the shot Camilla is seen sitting in the Morning Room at Clarance House, smiling broadly and holding one of the teddies on her lap with the rest surrounding her.

The Queen Consort is pictured with some of the 1,000 teddy bears that were left in tribute to Queen Elizabeth, which will now be donated to @barnardos.

The bears have been scrubbed up to look their best ahead of arrival at their new home. pic.twitter.com/IfMJnyHyXj

Members of the public will be delighted to hear that each bear will soon find its forever home as they will all be donated to Barnardos, a children’s charity Queen Elizabeth was once a patron of for over 30 years before passing along the patronage to Camilla in 2016.

“We promise to look after these bears who will be well-loved and bring joy to the children we support,” Barnardo’s chief executive Lynn Perry told the BBC.

“We are incredibly grateful to Her Majesty The Queen Consort for her support in helping us to raise awareness of the needs of vulnerable children and young people in the UK so that we can continue to support them through our vital services.”

While the sea of Paddington bear teddies left for the Queen was a bittersweet sight, it was one note that was left behind that truly resonated with mourners.

A note written by royal reporter Rick Petrachi went viral after many people claimed it “sums up” the current feelings of a grieving public.

“It hurts, ma’am. It hurts so bad. We’re not ready to bid you farewell,” the note begins.

“You have taught us everything except how to live in your absence.

“A Britain without its platinum Queen is unimaginable.

“After all, like Philip to you, you were our strength and stay.”

Petrachi closed out the touching note by claiming the Monarch will remain “forever in our hearts”.