Paddington Bear has tea with The Queen to celebrate Platinum Jubilee 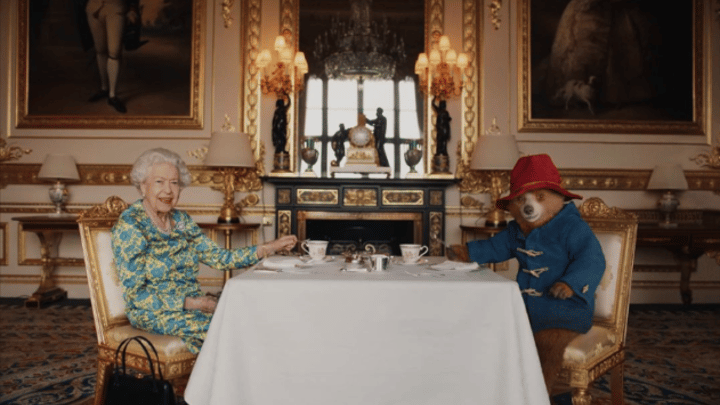 Paddington Bear made a surprise appearance to honour The Queen for her Platinum Jubilee, leading the way for the celebrity-packed lineup at the Jubilee concert.

In an adorable skit, Her Majesty and Paddington sit down to enjoy treats and tea before the clumsy bear causes pandemonium – drinking all the tea before offering any to the Monarch and squashing the treats.

Paddington offered The Queen one of his signature marmalade sandwiches hidden in his hat, to make up for the chaos, saying: “I always keep one for emergencies.”

“So do I,” Her Majesty responded, before pulling one out of her purse and grinning at the bear.

The coat and hat-wearing bear offers The Queen his heartwarming gratitude, removing his hat and saying: “Happy Jubilee, ma’am.”

“And thank you, for everything,” Paddington said.

The charming skit ended with two British Institutions tapping teaspoons on their teacups to the beat of Queen’s We Will Rock You as the concert kicked off.

Buckingham Palace released a statement saying The Queen couldn’t resist inviting Paddington to tea, saying the event was “too fun to miss”.

“Her Majesty is well known for her sense of humour, so it should be no surprise that she decided to take part in tonight’s sketch,” the Palace said.

“There was an interest in the filming and animation process and the opportunity to invite a famous bear to tea was just too much fun to miss.

“While The Queen may not be attending the concert in person, she was very keen that people understood how much it meant to her and that all those watching had a great time.”

The concert was opened by singer Adam Lambert and Queen, alongside Her Majesty’s Royal Marine’s Band Service, with prominent acts such as Sir Elton John and Sir Rod Stewart, including a performance by the legendary Diana Ross.

”And you can tell everybody that this is your song, it may be quite simple but now that it’s done, I hope you don’t mind that I put down in words, how wonderful life is while you’re in the world” Sir Elton John performs ‘Your Song’ from Windsor Castle for the #PlatinumParty pic.twitter.com/JxWqFgSZca

Camilla, Duchess of Cornwall and Prince Charles took to the concert stage where the Prince commended his “mummy” for her “lifetime of selfless service”.

“You have met us and talked with us. You laugh and cry with us and, most importantly, you have been there for us, for these 70 years,” he said.

“You pledged to serve your whole life – you continue to deliver. That is why we are here. That is what we celebrate tonight.”

The Duke and Duchess of Cambridge and their children Prince George and Princess Charlotte had front row seats to the concert, alongside their grandparents sitting in the Royal box.

Other Royal attendee’s included Prince Edward and Sophie, Countess of Wessex with their children Lady Louise and James, Viscount Severn; Princess Anne and Sir Timothy Laurence; Princess Beatrice and Edoardo Mapelli Mozzi; Princess Eugenie and Jack Brooksbank; Peter Phillips and his daughters; Zara and Mike Tindall; the Duke and Duchess of Gloucester; the Duke of Kent; Prince Michael and Princess Michael of Kent and Sarah Chatto and her family.