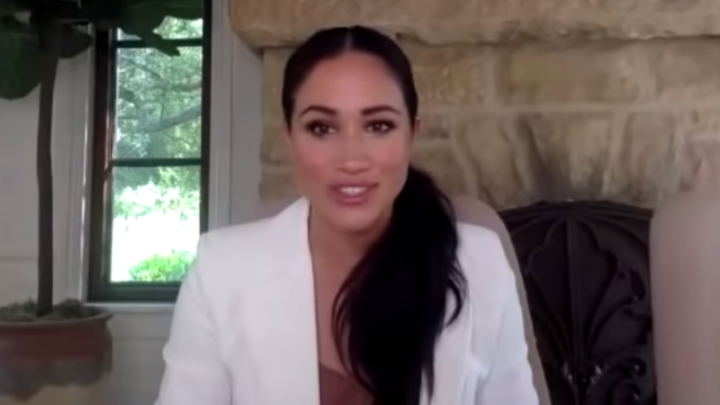 Meghan has been patron of Smart Works since January 2019. Source: YouTube.

The Duchess of Sussex made a solo – albeit virtual – appearance over the weekend as she took part in a video call to celebrate the one-year anniversary of the clothing line she designed for UK charity Smart Works.

Meghan looked relaxed and happy as she chatted with a group of women about the successes they’ve enjoyed over the past year. “I’ve heard all of your stories and I mean my goodness so much success with all the new job hires you have and just amazing to see what’s happened, especially with what everyone in the world has gone through in the past couple months,” she said.

Meghan became patron of Smart Works back in January 2019, when she and Prince Harry were still senior members of the royal family. Despite giving up her HRH title though, it seems Meghan is as keen as ever to remain involved with the charity, which helps women gain employment by offering coaching and providing professional clothing to wear to interviews.

Meghan launched ‘The Smart Set Capsule Collection’ last year, which included a perfect white shirt, an elegant blazer, well cut trousers, a dress that flatters everyone and the perfect tote. The range, which the duchess helped to design, aimed to offer women classic wardrobe pieces to help them feel confident as they mobilise back into the work space.

But it wasn’t just Meghan that captured people’s attention during the video chat, as the duchess also gave the public a glimpse into the family home she and the Duke of Sussex purchased earlier this year. The Sussexes reportedly bought the US$14.7 (AU$20.4M) compound in the coastal county of Santa Barbara, California, in June, which is around two hours’ drive from Meghan’s native Los Angeles, reports Variety.

The former actress was seated in front of an incredible stone fireplace, which had been styled with a framed print perched on the mantelpiece. According to Harper’s Bazaar, it is a vintage print of a bear holding the state of California in its arms. The image was originally the cover of sheet music for the state’s regional anthem, titled ‘I Love You, California’.

Meghan also appears to be sitting in a dining chair, which suggests the stunning room may be the couple’s dining area.

Are you a fan of the Duchess of Sussex?