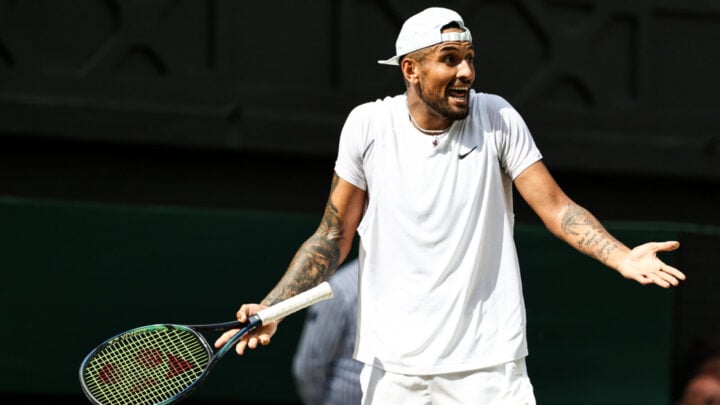 Australian tennis star, Nick Kyrgios, has reached a resolution with a fan that he labelled “drunk out of her mind” during this year’s Wimbledon final.

During the high-stakes final match between Kyrgios and Novak Djokovic at Centre Court on Sunday, July 10, Djokovic recorded a 4-6 6-3 6-4 7-6(3) victory over the Australian at the All England Club.

It was during the match’s third set that spectator, Anna Palus, claimed she was defamed after Kyrgios labelled her “drunk”.

“She’s distracting me when I’m serving in a Wimbledon final,” Kyrgios told the umpire at the time.

“Why is she still here? She’s drunk out of her mind and speaking to me in the middle of a game. What’s acceptable?

“Ok kick her out. I know exactly which one it is. The one in the dress, who looks like she’s had about 700 drinks bro.”

Following Kyrgios’ outburst, Palus was removed from the arena. She denied the allegations that she was drunk, claiming she only had two drinks and was only trying to cheer Kyrgios on.

On top of denying the claims that she was intoxicated, Palus was quick to launch legal action against the World No. 22. In a statement issued by her solicitor, Palus claimed the lawsuit stems from a “need to obtain vindication and to prevent repetition of the allegation”.

“On Sunday 10 July 2022 I attended the final of the Wimbledon tennis championships with my mother. It was an event we had been looking forward to for some time,” the statement read.

“Not only did this cause considerable harm on the day, resulting in my temporary removal from the arena, but Mr Kyrgios’s false allegation was broadcast to, and read by, millions around the world, causing me and my family very substantial damage and distress.

“I am not litigious, but after much consideration, I have concluded that that I have no alternative but to instruct my solicitors Brett Wilson LLP to bring defamation proceedings against Mr Kyrgios in order to clear my name.

“Any damages recovered will be donated to charity.

“I hope that Mr Kyrgios will reflect on the harm he has caused me and my family and offer a prompt resolution to this matter.”

Now it would appear that Kyrgos has done exactly that after it was reported that the tennis star has not only apologised but will donate £20,000 ($A35,000) to the Great Ormond Street Hospital Charity.

“On 10 July 2022, during the Wimbledon Men’s Final, I told the umpire that a fan, who I now know to be Anna Palus, was distracting me during the match, believing that she was drunk,” Kyrgios said in a statement released by Knight Temple Law that was provided to The Daily Mail.

“I accept that belief was mistaken, and I apologise. To make amends, I have donated £20,000 to the Great Ormond Street Hospital Charity, a charity chosen by Ms Palus. I will not be commenting on this matter again.”

Kyrgios is no stranger to on-court controversy, not only has he fought with umpires, spectators, and line judges, the tennis star recently drew the ire of the tennis community and fans for an on-court meltdown following his loss to Karen Khachanov in the US Open quarter-finals.

After congratulating his opponent, Kyrgios was spotted smashing two tennis racquets into the court in wild scenes that left the fans and the tennis community shocked.