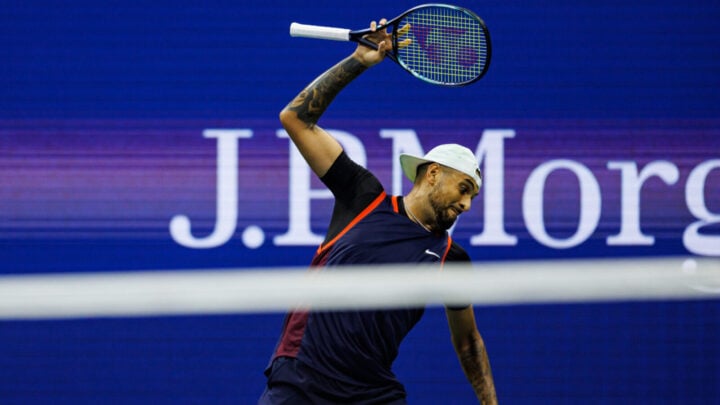 After congratulating his opponent, Kyrgios was spotted smashing two tennis racquets into the court in wild scenes that left the fans and the tennis community shocked. Source: Getty Images.

Despite an impressive run at the US Open, Nick Kyrgios’ dream of a grand slam victory came to an end on Wednesday, September 7 following a five-set quarterfinal loss to Karen Khachanov.

In an almost four-hour match, Khachanov secured a 7-5 4-6 7-5 6-7(3) 6-4 victory over Kyrgios, dashing the 27-year-old’s chances of becoming the first Australians to reach the semi-final since Lleyton Hewitt 17 years ago.

Hats off to @NickKyrgios on an incredible tournament and so many exciting matches.

See you next year. pic.twitter.com/0PeKHmWwwd

A disappointed Kyrgios reflected on the outcome in his post-match press conference, revealing the loss is “heartbreaking” not just for him but for but also for those supporting him.

“But all credit to Karen. He’s a fighter. He’s a warrior. I thought he served really good today. Probably the best server I played this tournament, to be honest, the way he was hitting his spots under pressure.

“It’s just devastating. Like, it’s heartbreaking. Not just for me, but for everyone that I know that wants me to win.

“People don’t really care if you got better on the day, or you lost four in the fifth, or played one of the best matches of the tournament. You lost.

“That’s all people remember at a Grand Slam, whether you win or you lose.”

Kyrgios’ composed and contemplative demeanour in his post-match interview stood in stark contrast to his on-court meltdown following his loss to Khachanov. After congratulating his opponent, Kyrgios was spotted smashing two tennis racquets into the court in wild scenes that left the fans and the tennis community shocked.

Former Australia professional tennis player and current sports broadcaster Todd Woodbridge was among the first to call out Kyrgios for his pot-match tantrum.

Am i terrible person if i say that I’m really glad Kyrgios did not win? That behaviour is disgraceful & has no place in ANY sport. And just the fact that spectators and some pundits romanticise and encourage it, saying “it’s good for the game” makes it worse. #UsOpen #Tennis

While journalist and tennis commentator, Jose Morgado saw Kyrgios’ outburst as a sign that he truly cares about the sport and his performance.

Nick, more than anyone, knows that he just lost the biggest chance of his career.

Tough, tough one for someone who finally seems to care about his job. https://t.co/ZsTDd75Ppt

Senior Editor of Racquet Magazine, Ben Rothenberg also seemingly sympathised with Kyrgios, claiming that “being the favorite to win a Slam is no small challenge”.

Kyrgios will rue that one, but the first time being the favorite to win a Slam is no small challenge.

I just hope that, when he plays again next, Kyrgios focuses on himself rather than obsessing over whether or not his support team is adequately vocal throughout. Got so, so old.

The reaction to Kyrgios’ outburst was not just confined to the stands of the tennis stadium with tennis fans sharing a mixed bag of feelings towards the 27-year-old’s on-court behaviour.

You can say whatever you want about Nick, but the one thing you simply cannot say is that he isn’t good or overrated, dude has literally been the best in the world the past few months, 24-6 his last 30 matches and he had a thigh injury this match, just needs to chill out a bit

@NickKyrgios attitude is disgraceful. The ATP need to stop accepting him for tournaments until he can learn to behave in a socially acceptable manner. Imagine any of us behaved like this at work?

I can’t imagine the pressure these guys are under. My heart goes out to him.