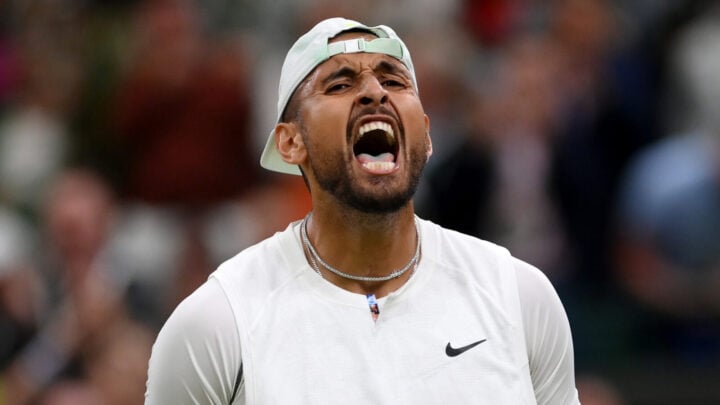 In a statement issued by her solicitor, Anna Palus claims the lawsuit stems from a "need to obtain vindication and to prevent repetition of the allegation". Source: Getty Images.

A tennis fan who was labelled “drunk out of her mind” by Nick Kyrgios during this year’s Wimbledon final has launched legal action against the sporting star, claiming she was defamed by the “entirely baseless allegation”.

During the high-stakes final match between Kyrgios and Novak Djokovic at Centre Court on Sunday, July 10, Djokovic recorded a 4-6 6-3 6-4 7-6(3) victory over the Australian at the All England Club.

Despite Kyrgios coming out strong in the opening set, striking 14 winners and only four unforced errors, an unshakeable Djokovic turned the tide in the second set, racing to a 4-1 advantage in the fourth game. Djokovic was then able to further his lead and take control of the match from a distracted and frustrated Kyrgios, holding a two-set-to-love lead in the third set.

A more composed Kyrgios secured a fourth-set tie but in the end, could do little to prevent Djokovic from securing his seventh career Wimbledon title.

However, it was during the match’s third set that Kyrgios claimed spectator Anna Palus was “drunk” and distracted him.

“She’s distracting me when I’m serving in a Wimbledon final,” he told the umpire.

“There’s no other bigger occasion, you didn’t believe me and then she did it again. It nearly cost me the game.

“Why is she still here? She’s drunk out of her mind and speaking to me in the middle of a game. What’s acceptable?

“Ok kick her out. I know exactly which one it is. The one in the dress, who looks like she’s had about 700 drinks bro.”

Following Kyrgios’ outburst, Palus was removed from the arena. She denied the allegations that she was drunk, claiming she only had two drinks and was only trying to cheer Kyrgios on.

“I understand what it is like to be an underdog so I wanted to give him support,” she told The Telegraph.

“Maybe I took it too far so for that I am sorry but I only had good intentions.”

On top of denying the claims that she was intoxicated, Palus has now launched legal action against the World No. 26. In a statement issued by her solicitor, Palus claims the lawsuit stems from a “need to obtain vindication and to prevent repetition of the allegation”.

“On Sunday 10 July 2022 I attended the final of the Wimbledon tennis championships with my mother. It was an event we had been looking forward to for some time,” the statement read.

“During the course of the final, Nick Kyrgios made a reckless and entirely baseless allegation against me.

“Not only did this cause considerable harm on the day, resulting in my temporary removal from the arena, but Mr Kyrgios’s false allegation was broadcast to, and read by, millions around the world, causing me and my family very substantial damage and distress.

“I am not litigious, but after much consideration, I have concluded that that I have no alternative but to instruct my solicitors Brett Wilson LLP to bring defamation proceedings against Mr Kyrgios in order to clear my name.

“Any damages recovered will be donated to charity

“I hope that Mr Kyrgios will reflect on the harm he has caused me and my family and offer a prompt resolution to this matter.”

Kyrgios is no stranger to on-court controversy, not only has he fought with umpires, spectators, and line judges, the tennis star recently drew the ire of the tennis community when he chose to wear a red cap during the Wimbledon trophy ceremony which is a breach of Wimbledon’s all-white dress code.

A rebel to the end. Nick Kyrgios has been told not to wear his red hat on Centre Court. He simply doesn’t care!! ???? #Wimbledon pic.twitter.com/PHx7fnKyY0

Following the hard-fought match against Djokovic, Kyrgios took a seat courtside and switched his white cap for a red one before receiving the runner-up trophy from the Duchess of Cambridge.