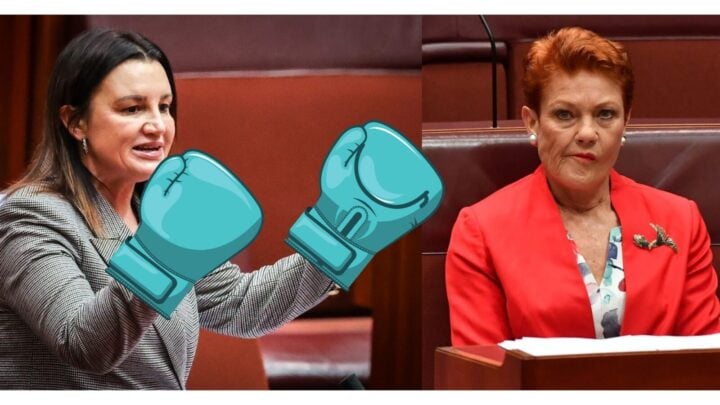 Tasmanian Independent Senator Jacqui Lambie has taken fiery aim at senators who have crossed the floor to support a controversial anti-discrimination bill, aimed at scrapping a bill spearheaded by One Nation Senator Pauline Hanson.

Hanson’s bill, officially titled “Covid-19 Vaccination Status (Prevention of Discrimination) Bill 2021″, was introduced to “end mandatory jabs”; a cause Hanson has repeatedly spoken out for.

However, the bill faced staunch opposition from almost the entire floor, with the bill being read for the second time, and argued over by many senators.  Lambie launched a scathing tirade against Hanson’s bill, Hanson’s political party One Nation, and Hanson herself, in a much-publicised eight-minute monologue that attacked the very core of what Pauline Hanson’s One Nation stands for, claiming that the bill was purely being pushed for monetary gain.

“One Nation are not fighting against discrimination; One Nation seek to profit from it. It’s just a fund-raising exercise for them. That’s all this is,” Lambie said.

“You can’t call every consequence of choice a discrimination.”

Lambie then went on to destroy the platform the bill was built upon, saying:

“But you don’t get to decide how the rest of Australia responds to that choice. You can’t force someone else to act a certain way, the same as you, because of your freedom to choose.”

From here, Lambie then likened those who are unvaccinated, and are complaining about the hampering of their freedoms through vaccine mandates in workplaces, schools and socials settings, to those who chose to work in a school, or with other vulnerable people, but refuse to get the appropriate checks.

On this Lambie said:

“Some might say that if you’re vaccinated because you’re required to be in order to keep your job, then you’ve been forced to get vaccinated. But that’s not right; that’s not being truthful at all. That is not correct. If you want to work with vulnerable people, you need to get a National Police Check. If you want to work with kids, you have to have a Working With Children Check. That is the way it is, and we do that to keep people safe. How about that? We put others before ourselves.”

Lambie won her battle against the bill, with it failing to gather enough support to be passed.

You can see Lambie’s full blast against the bill below.

After her furious jab about Hanson’s jab bill, Lambie went back for round two, further supporting her speech and opposition to One Nation by tweeting:

I said for One Nation, this isn’t about COVID discrimination, it’s about cash.

An hour later they send out this email, asking for cash. https://t.co/2R8j3mVUJu pic.twitter.com/R51TICUNwE

Since this entire feud unrolled yesterday, Lambie has also taken a shot at Prime Minister Scott Morrison for having unclear messaging around vaccination mandates.

“I think the states have done a great job and I’m really grateful especially in Tasmania, Peter Gutwein [has had a] 90 per cent success rate down there at the moment,” Senator Lambie said this morning while speaking to ABC Radio National.

“Everybody is loving him. He’s done the right thing … He’s been very clear and precise every time he puts a message out there and that’s worked very, very well.”

“… I suggest the Prime Minister do the same thing but he can’t play both sides of the fence. That is very dangerous and that is what is bringing division into this country.”

“Be solid, be a leader and show it,” Lambie said.

“[The Prime Minister] needs to show some leadership now. He needs to go out there and do that. And he’s running out of time.”

“There’s nothing else we have on the front line that would give us a good chance of keeping our health intact,” she said.

“And I will not be like those people playing Russian roulette with people’s lives. I just will not do that.”

Additionally, this morning Liberal MP George Christensen threatened to cross the floor to support Hanson and her bill. Should this happen, Morrison will need the assistance of at least one cross-bench member to pass the legislation.

“Until federal action is taken against vaccine discrimination, I will be voting according to my conscience, or abstaining from votes… rather than just voting with the government as MPs usually do.”

“I intend not to be beholden to party room discipline when voting in the House of Representative.”

“My support is not guaranteed on bills or substantive motions,” Mr Christensen said.

“When action is taken to stop vaccine discrimination, I will go back to the normal process of voting with the government”.

Rebutting, Hanson retweeted stories about Christensen’s support of her bill, or rather, lack of support for Morrison’s position, as well as news footage detailing the story as it unfolds:

The Coalition party room is meeting this morning as the Prime Minister faces a growing rebellion within his own ranks over vaccine mandates. @Stela_Todorovic has the details from Parliament House. pic.twitter.com/Fb7USSWcrp