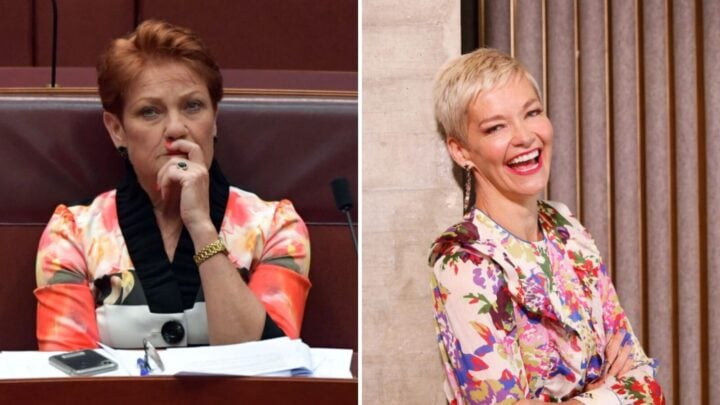 Rowe was criticised actively by Australian of the Year Grace Tame and other high profile personalities on Thursday on Twitter including actor/comedian Nakkiah Lui and Tim Soutphommasane, former race discrimination commissioner, >with the Twitter stream trending for more than 24 hours and driving widespread critique.

Tame accused Rowe of valorising Pauline Hanson making her opinion clear in a tweet that was later deleted.

Tame wrote: “This is how discrimination and hate is subtly enabled and normalised. Everyone’s entitled to their own views, but not all views should be valorised by promoting their source. Pauline doesn’t need to be heard, but those whose oppression she’s both driven and reinforced do.”

“Jess, I have a lot of respect for you but this is not it. You’re platforming a racist. You’re celebrating someone who has made a career/$$$ from degrading, disrespecting and dehumanising many people. If you’re not interrogating them, you’re validating those racist opinions.”

This is how discrimination and hate is subtly enabled and normalised.

Everyone’s entitled to their own views, but not all views should be valorised by promoting their source.

Pauline doesn’t need help to be heard, but those whose oppression she’s both driven and reinforced do. https://t.co/47neuswec7

12 hours after pulling the post the Twitter stream is mixed in its views of whether Rowe’s rush to delete the interview was the right move.

Rowe, 51 was interviewing Hanson, 67 on her podcast “The Jess Rowe Big Talk Show” exploring her family life, the hardships she has faced over many decades and her hobbies of gardening, knitting and reading.

“She talks love, raising kids & why she keeps going,” Rowe tweeted on Wednesday afternoon. She specific states in promotions that the interview “isn’t about politics” but rather “how Pauline has dealt with some of the darkest moments of her life and where she finds the resilience to keep going”.

After enormous social media criticism, Rowe, who has spoken publicly about her mental health, moved to have the podcast taken down from the podcasting platform LiSTNR last night.  This has then driven another round of anger on Twitter, with both sides joining the debate.

Rowe, a respected journalist and television presenter, released a statement late on Thursday making her position on the subject clear.

“Pauline’s political views are the opposite of mine. I have never agreed with her on those issues. Never will. Kindness is at the heart of who I am,” Rowe wrote. “Amongst the comments today I heard from some who I admire enormously including Nakkiah Lui and Grace Tame and I want to thank them especially for their candour.”

“This will be start of a bigger conversation for me and with those who this topic directly affects,” she said. “I have asked LISTNR to remove the episode ASAP.”
Pauline Hansen released a statement on Thursday also, in response to the removal of the podcast and the Twitter storm.

She called out the social media pressure as ‘intimidation’ and ‘harassment’.

“The usual woke suspects freaked out and made it their mission to bully a female host who openly admits to struggling with mental health issues brought on by keyboard warriors,” Senator Hanson said.

“Serial culprits should be ashamed of themselves for the deliberate intimidation, targeted harassment and stress they put on Jessica Rowe.

“I don’t agree with her pulling it down, but I get it.”

She then spoke about the decision on another podcast with Marcus Paul on Thursday, expressing her displeasure.
“The podcast was pulled down because it portrayed me in a light that I’m just your next-door neighbour but a person with integrity, honesty and a person who stands my ground and won’t be pushed around.

“They don’t want you to see that … that’s the negativity I’ve always had to deal with it.”

It is now rapidly becoming a discussion about social media pressure and the right to exert it.

One Nation MP Mark Latham criticised the deletion of the post on Twitter. “Jessica Rowe, the ‘journalist’ who only broadcasts material with which her friends agree. The ultimate Echo Chamber.”

Jessica Rowe, the ‘journalist’ who only broadcasts material with which her friends agree.
The ultimate Echo Chamber. https://t.co/QFKu5Z4e8H

Do you think Jessica Rowe made the right move to pull the interview?