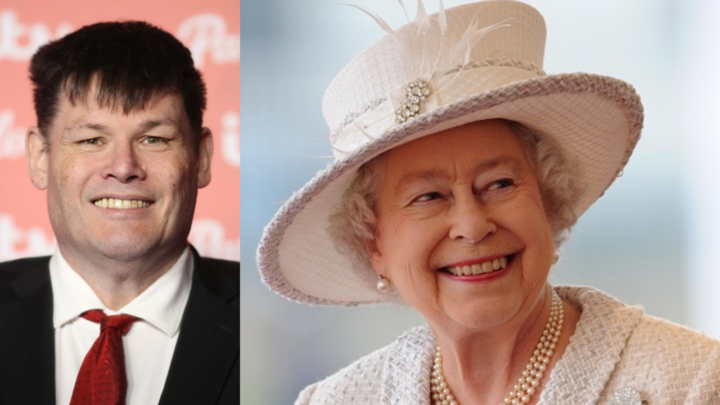 Throughout her historic 70-year reign, Queen Elizabeth II touched the hearts of many, particularly The Chase star Mark “The Beast” Labbett who revealed it was Her Majesty’s sense of humour that he’ll miss the most.

Following the death of Queen Elizabeth on September 8, Labette took to Twitter to join the thousands of people who paid tribute to the late Queen.

While many spoke of the late Monarch’s wit and service to her country, the quiz master shared that he’d gotten emotional after watching one of the Queen’s comical television performances.

Rewatched “Happy and Glorious” aka the Queen and James Bond at the London Olympics opening ceremony. Brought a tear to the eye. RIP your majesty

The Queen’s sketch with the James Bond actor, Daniel Craig, was a highlight for the billions of viewers who tuned in for the televised opening ceremony of the 2012 London Olympics.

The clip starts off with James Bond arriving at Buckingham Palace to escort the Queen to the Olympic stadium and the pair make their way to the venue via a helicopter ride over London.

Upon their arrival, instead of landing at a helicopter pad, Bond and Her Majesty parachute their way down to the stadium.

No member of the public or Royal Family knew about Her Majesty’s agreement to co-star with Craig for the opening as it was assumed that a body double would play the Queen.

According to The Hollywood Reporter, Frank Cottrell-Boyce, the writer behind the Olympic ceremony, told BBC Radio that producers had initially gone to the Palace to find an outfit for the Queen’s double to wear, only to be told that Her Majesty wanted to be in the video.

“The queen’s dresser asked, ‘Why are you doing all this?’ And we told her, ‘So we can make it look like the queen.’ So she said: ‘Oh, the queen wants to do it,’” he explained.

“She put herself up for that, she wanted to be in the sketch.”

Cottrell-Boyce then went on to reveal it was the Queen who insisted she is given a speaking role, something he had not originally planned.

“On the day we were filming, she said to Danny Boyle, ‘I think I should have a line,’” he recalled.

“She bagged that. She didn’t have a line in the script.”

Her Majesty was then given the iconic line, “Good evening, Mister Bond.”

However, this wouldn’t be the first time the Queen showed off her sense of humour. For her Platinum Jubilee earlier in June, Buckingham Palace showed a delightful comedy sketch starring the Queen and Paddington Bear.

While the Queen rarely allowed the public to venture deeper into her private life, her brief roles and handful of comedy sketches have given the world a sense of her humour and willingness to entertain, making them delightful memories to look back to now that she has passed.