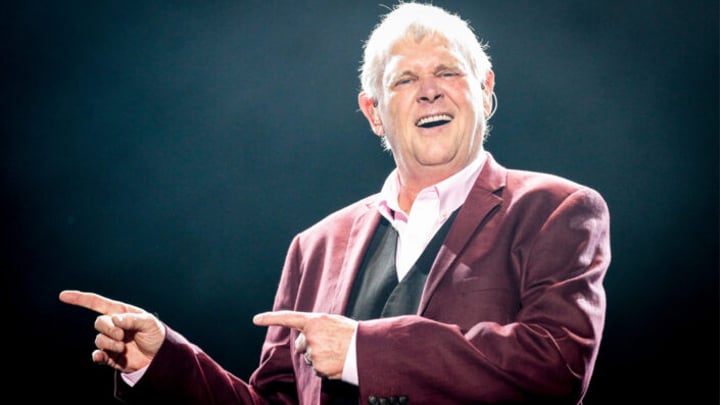 In a statement issued by Farnham's family, his wife Jill and sons Rob and James said they "were delighted to see Robbie Williams dedicate his performance of You’re The Voice to John". Source: Getty Images.

As John Farnham continues his road to recovery following surgery and treatment for cancer, international singing sensation Robbie Williams delivered his love to Farnham and his family with a moving tribute during the AFL Grand Final.

Farnham was admitted to hospital in Victoria on August 23 for “surgery and ongoing treatment” after doctors discovered “a cancerous growth”.

At the time, Farnham issued a statement where he expressed his gratitude for having “the best specialist healthcare professionals in Victoria”.

“Cancer diagnosis is something that so many people face every single day, and countless others have walked this path before me,” he said.

Following a “successful” surgery that took a marathon 12 hours, it was announced that Farnham was in a stable condition and on the road to recovery.

Farnham’s wife, Jill, provided an update at the time where she revealed her husband was in “a stable condition in ICU”.

“The cancer tumour was located in his mouth and it has been successfully removed. There is still a long road of recovery and healing ahead of us, but we know John is up for that task,” she said.

Prior to Geelong facing off against Sydney on Saturday, September 24, Williams took to the stage at the Melbourne Cricket Ground to belt out a 20-minute performance that included a rendition of Farnham’s hit song You’re The Voice.

“The next song is the unofficial national anthem of Australia,” Williams said.

“Let’s all send our love to John and his family.”

In a statement issued by Farnham’s family, his wife Jill and sons Rob and James said they “were delighted to see Robbie Williams dedicate his performance of You’re The Voice to John”.

“John was watching from hospital and was deeply touched by that very generous gesture. He thoroughly enjoyed Robbie’s performance too,” the family revealed.

Seemingly not content with honouring just one Aussie legend, Williams also delivered a tribute to another Australian icon, that of the late Shane Warne. While pointing to the Shane Warne Stand, Williams dedicated his smash hit Angels to the cricket legend.

“This next song is dedicated to one of Australia’s greatest rock stars, Shane Warne. Love you, Warnie,” he said.

Warne died of a suspected heart attack, age 52, while holidaying on the island of Koh Samui in Thailand on March 4. Williams and Warne were close friends, their bond so strong that Williams recorded a performance to be played at Shane Warne’s funeral in memory of his friend.

It seems that Farnham and his family weren’t the only ones “delighted” by the performance with Australians across the country singing Williams’ praises for an incredible performance and beautiful tribute to both Farnham and Warne.

What class. Robbie Williams not only singing You’re The Voice but having John Farnham’s image on the big screen as tribute at the MCG.

Robbie Williams covering John Farnham’s You’re the Voice. This is the best day of my mum’s life, crying in 3,2,1…

Whatever the AFL paid Robbie Williams it was worth it.

Robbie Williams performing Angels and dedicates it to “one of Australia’s greatest rockstars”, Shane Warne.

Farnham fans were no doubt delighted recently after it was revealed that the singling legend had been moved to a rehabilitation centre and that his medical team “are very pleased with his progress”.

In a statement issued by Farnham’s family on Thursday, September 22, his loved ones expressed their gratitude to the medical professionals “who have taken such good care of John” while providing an update on the Australian icon’s health status.

“His medical team are very pleased with his progress over the past month.

“He was moved from ICU and into a general ward a couple of weeks ago. That in itself was terrific progress.

“Each of these steps means things are moving in the right direction and for that we are enormously thankful.

“Our family is so very grateful to all the remarkable teams of Victorian medical professionals who have taken such good care of John.

“These outcomes are a credit to their dedication, skills and compassion.”

Did you catch Robbie William's tribute to John Farnham at the AFL Grand Final?