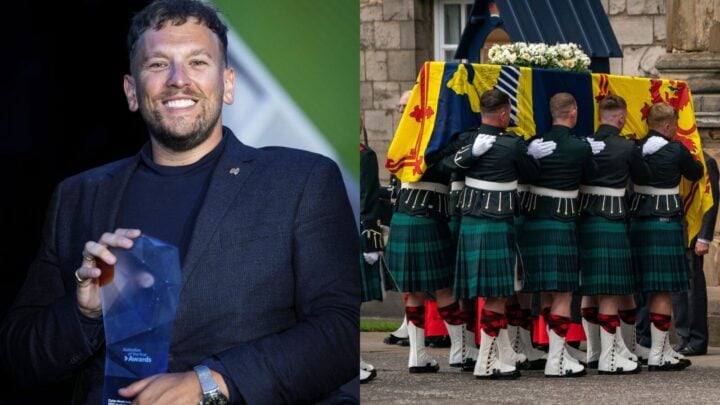 Dylan Alcott among those going to the Queen's funeral. Source: Getty

Tennis champion and Australian of the Year, Dylan Alcott, is among the limited number of Australians to receive an invitation to Queen Elizabeth II’s funeral.

The sportsman was recently given the privilege of meeting Her Majesty earlier this year in the lead-up to the Monarch’s Platinum Jubilee celebrations.

During a recent appearance on The Morning Show, Alcott dished on the momentous visit with the 96-year-old Monarch.

“I threw a couple of jokes out there, they landed!

“I think the headline over in the UK was ‘Australian Of The Year makes the Queen laugh’, so that was cool.

“The Palace said afterwards that it was one of the best chats she’s had in a few years.”

At the Palace’s invitation, 10 Australians who have made extraordinary contributions to their communities will attend the funeral of Queen Elizabeth II alongside the Prime Minister and Governor-General on September 19.

Here’s more about who they are:

In an announcement on Twitter, Albanese listed the attendees’ notable achievements that garnered them an invitation to the funeral.

“Danny Abdallah founded the i4give Foundation to assist families like his own who have suffered through trauma, and to increase community awareness of the power of forgiveness,” he wrote.

“Saba Abraham is a QLD Local Hero 2022. She is an Eritrean refugee and played a vital role preventing the spread of COVID-19 as the Chairperson of the Brisbane Community Leaders Gathering.

“Valmai Dempsey is the ACT Senior Australian of the Year 2022. She has dedicated her life to St John Ambulance and led 40 volunteers to support fire-affected communities during the 2020 Black Summer bushfires.

“Trudy Lin is the SA Young Australian of the Year 2022. She is one of only 20 practising specialists in Australia’s Special Needs Dentistry.

“Professor Helen Milroy was Australia’s first Indigenous Doctor. She was awarded Australian of the Year for Western Australia in 2021. She is a pioneer in research, training and education in both Aboriginal and child mental health.

“Dr Miriam-Rose Ungunmerr Baumann AM is an Aboriginal elder, artist and activist of the Ngan’gityemerri language group. She established the Miriam Rose Foundation to drive reconciliation at a grassroots level.

“Chris Waller is a Hall of Fame horse trainer. Horses he has trained include the record breaking Winx as well as Chalk Stream, a UK born thoroughbred owned by Queen Elizabeth herself.

“Shanna Whan is the 2022 Local Hero Australian of the Year for her advocacy work leading the grassroots charity Sober in the Country.”

The invitees will travel to London on Thursday, September 15  for the funeral on Monday, September 19, where Albanese and Hurley will meet King Charles III.

The Prime Minister and Governor-General will return in time for Australia’s “one-off” National Day of Mourning where a National Memorial Service for the Queen will be broadcasted live from the Great Hall of Australian Parliament House in Canberra at 11:00 am.

September 22nd will be a national public holiday and an opportunity for communities all over Australia to remember the Queen. pic.twitter.com/F6q7yYYGB1

Albanese said he’d conferred with the nation’s Premiers and Chief Ministers on the decision to allow the Australian public the day to honour the Queen.

“Her Majesty, Queen Elizabeth the Second led a remarkable life, dedicated to service and duty,” the Prime Minister said in a statement.

“I have asked Premiers and Chief Ministers that Thursday 22 September 2022 be declared a National Public Holiday in honour of the life and service of our late Queen. Over the coming weeks, Australia will continue to commemorate our late Queen.

“I encourage all Australians, wherever you may be, to take time to pause and reflect on Her Majesty’s extraordinary life of service.”