‘One of the best chats’: Tennis star Dylan Alcott opens up on his audience with the Queen 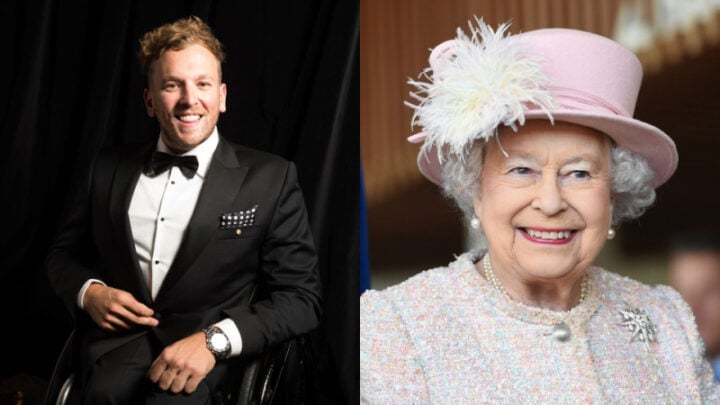 In addition to being named Australian of the Year and achieving a Grand Slam in tennis, sports star Dylan Alcott can now tick off holding an audience with the Queen from his bucket list.

As part of the lead-up to the Queen’s Platinum Jubilee celebrations earlier this year, Her Majesty met with the Australians of the Year to congratulate them on their achievement.

During a recent visit to The Morning Show, Alcott dished on the momentous visit with 96-year-old Monarch.

“I threw a couple of jokes out there, they landed!

“I think the headline over in the UK was ‘Australian Of The Year makes the Queen laugh’, so that was cool.

“The Palace said afterwards that it was one of the best chats she’s had in a few years.”

On top of meeting with royalty Alcott has built an impressive sporting career over his lifetime. Alcott’s sporting endeavours started young when at the young age of 16 he ranked among the top five juniors in the world in tennis.

He went on to win the New Zealand Open in 2014 and in July of the same year he defeated world number three Andy Lapthorne in the British Open Wheelchair Tennis Championship final in Nottingham to win his first Super Series crown.

Alcott made history in 2021, becoming the third professional tennis player to achieve a Golden Slam after securing wins in the Australian Open, French Open, Wimbledon, the US Open and the singles gold medal at the 2020 Summer Paralympics.

He retired from tennis in January 2022, after his Australian Open quad wheelchair singles final on January 27 against Sam Schroder.

On top of his many sporting accolades, Alcott received his second major honour for 2022, following his Australian of the Year title, when it was announced he would receive a Madame Tussauds wax figure.

Following the announcement, Alcott described the news as “an absolute honour”, expressing his love and appreciation for Madame Tussaud‘s attractions.

“Being approached to receive a Madame Tussauds wax figure is an absolute honour,” he said.

“I’m such a huge fan of the Madame Tussauds attractions, they’re home to the biggest celebrities in the world and I feel so proud that I’ll be amongst them!”

Alcott said the honour was a “huge step” in achieving better and more equal representation of people living with a disability as he thanked the museum for being part of the change.

“4.5 million people in Australia are living with a physical or non-physical disability and we need greater representation of people with a disability in everyday life. Being honoured with a wax figure is huge step in achieving that,” he said.

“Thank you to the Madame Tussauds team for helping to celebrate and normalise living with a disability.”