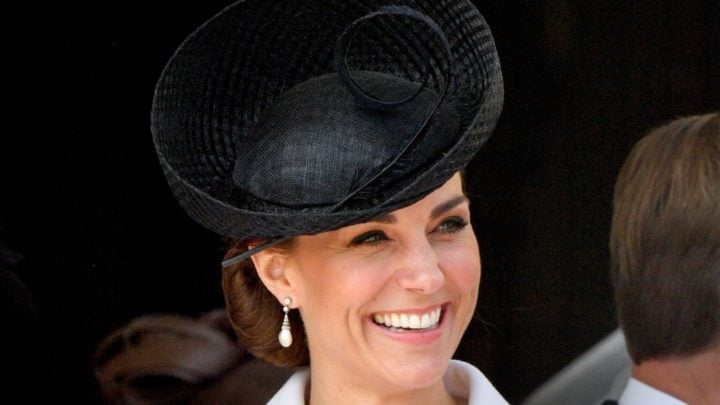 Duchess Catherine put her fashion foot forward as she attended the Garter Day service and ceremony at Windsor Castle.

It’s one of the most important dates on the calendar for the royal family and Catherine, Duchess of Cambridge, was the picture of elegance as she attended this year’s Garter Day service and ceremony at Windsor Castle.

On Monday afternoon, the 37-year-old joined husband Prince William, Queen Elizabeth, Camilla, Duchess of Cornwall, and members of the European royal family for the lavish service.

According to Kensington Palace, The Order of the Garter is the oldest and most senior Order of Chivalry in Britain and was established by King Edward III almost 700 years ago. The Order includes Sovereign of the Garter Queen Elizabeth, Prince William and several senior members of the royal family. It also includes 24 knights or ladies chosen in recognition of their work.

“Knights of the Garter are chosen personally by the Sovereign to honour those who have held public office, who have contributed in a particular way to national life or who have served the Sovereign personally,” a statement from Kensington Palace said.

Each year in June, the grand procession of the knights takes place at Windsor Castle, accompanied by a marching band and Officers of the Order, all in grand ceremonial dress.

For the event, Catherine stunned in a trendy button-down white coat dress. The trendy number was complete with fine black lace around the edges and matched perfectly with her black fascinator, shoes and purse.

The mother-of-three accessorised with a gorgeous pair of pear earrings and wore her luscious brunette locks in a stylish bun. She was photographed alongside some of the most fashionable royals from overseas.

Queen Maxima of the Netherlands, for example, turned heads in a plush pink number for the outfit. Similar to Catherine, she also opted for a fashionable head piece.

This included grand velvet robes and plumed hats. The day began with Queen Elizabeth formally investing new Companions with the Order’s insignia in the Throne Room of the Castle. Members and officers attended a lunch, before they made their way to a service at St. George’s Chapel.

The Sovereign and other members of the Order then returned to the Upper Ward of the castle in carriages and cars. This year, the Queen was joined by the Prince of Wales and Duchess of Cornwall.

The Duke and Duchess of Cambridge departed the service with the King and Queen of Spain.

The Queen processes accompanied by The Prince of Wales and The Duchess of Cornwall through the grounds of Windsor Castle. #GarterDay @ClarenceHouse pic.twitter.com/oytyAV7Fy8

Have you ever met one of the royal family members? Who is your favourite?