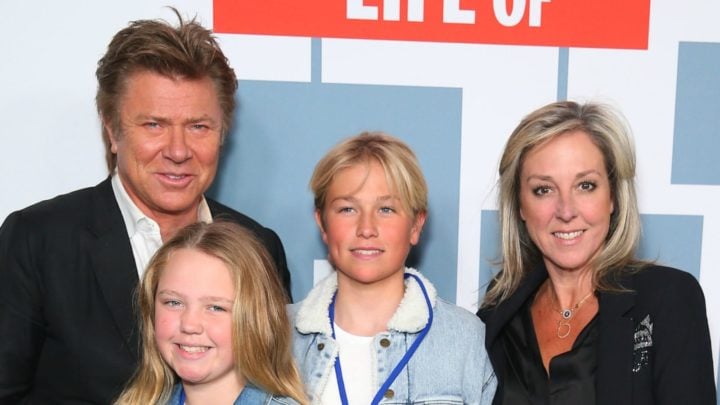 Entertainment guru Richard Wilkins and his glamorous girlfriend Virginia took time out of their busy schedules for a fun night out with the family. Source: Getty

He’s usually the man interviewing celebrities on the red carpet but earlier this week, Channel Nine star Richard Wilkins was one of the big names at a star-studded event in Sydney.

Along with girlfriend Virginia Burmeister and her two children Ciel and Blaise, Richard was a special guest at the Australian premiere of The Secret Life of Pets 2. With school holidays just around the corner, the animated film is no doubt going to be a hit with children around the country.

For the latest event, the Today Extra host looked as dapper as ever in a stylish black suit and smart white button-up shirt. The 64-year-old appeared to coordinate his look with his glamorous partner, who also opted for black for the premiere.

Virginia worked the camera in a fashionable pair of black skinny jeans, a black silk blouse and a trendy blazer to keep her warm. The dancer and model accessorised with a pair of leather shoes, a chunky belt and a necklace. She also wore her luscious blonde locks in a straight style.

Perhaps the highlight was Ciel and Blaise, who Virginia and Richard brought along as special guests. The pair beamed with delight before the screening of the film.

It’s not the first time Richard and Virginia have made their dates a family affair. Last month the family celebrated Mother’s Day with other family members including Richard’s son Christian.

Richard and Virginia regularly attend glamorous events together. They recently stepped out together for the Australian premiere of Rocketman – the film based on singer Elton John’s life – at Sydney’s iconic State Theatre.

For that film premiere, Virginia looked every inch the star in a sparkly and colourful number that showed off her legs. For the screening, she accessorised with a golden pair of heels and again, wore her blonde hair down for the evening. Her choice of red lipstick and nail polish also added a further pop of colour to her ensemble.

Richard wore a black velvet jacket and looked smart in a tie.

He joked with his son Christian on the red carpet for the event. While Richard was covering the premiere for Today Extra, his son was there on behalf of the E! Network.

“Coming for your crown,” the model joked to his father.

Richard has always been open about his family and children earlier this year spoke about his Down syndrome son Adam – who he fathered at 18 but decided to place in care in New Zealand.

“I’m quite happy to admit, well I’m prepared to admit, that I wasn’t the greatest father back in the day,” he said on Today Extra.

“I didn’t really know how to handle it, I was 18, I was getting on with my life and career, I wanted to travel the world and make music and do that sort of stuff and it was with some reluctance that after about a year we put Adam in a home.”

This World Down Syndrome Day we caught up with some amazing Aussie families who shared their experience of living with Down Syndrome. #9Today pic.twitter.com/uopiQy6mhy

He also said having a person with Down syndrome person in his family is an “absolute joy”.

Are you a fan of Richard Wilkins? Have you ever been to a red carpet event?