Richard Wilkins and his girlfriend Virginia Burmeister joined a crowd of lucky Aussies at the premiere of movie Mary Queen of Scots this week. They are pictured above at a different event last year. Source: Getty

Television presenter Richard Wilkins and his stunning girlfriend Virginia Burmeister dolled up for a fabulous night in Sydney at a movie premiere this week.

The happy couple looked the perfect pair as they posed for photos on the red carpet prior to a special screening of hit film Mary Queen of Scots.

The movie follows the story of the Mary, Queen of Scots and Queen Elizabeth I who are rivals in both power and love. The highly acclaimed film has already received much praise, with three nominations at the British Academy Film Awards, including Best Support Actress for Margot Robbie, Best Costume Design and Best Makeup and Hair. Aussie-born Robbie also earned herself a nomination for Best Supporting Actor at the Screen Actors Guild.

Richard chose a smart casual look for the evening event on Tuesday, stepping out in a pair of dark navy blue pants and matching coloured shirt, complete with a black jacket and grey shoes. 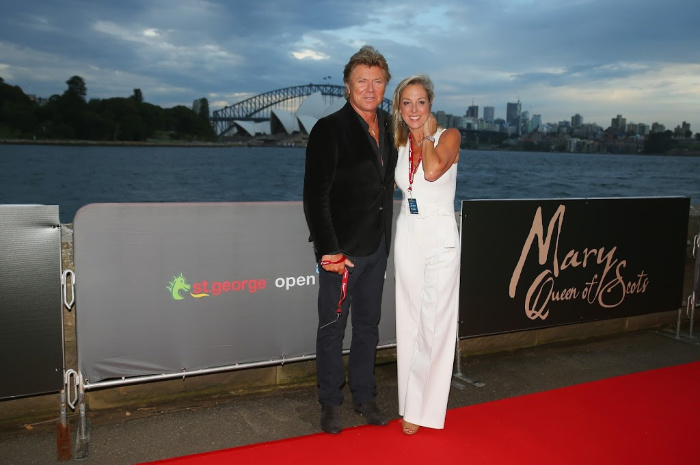 His glamorous girlfriend wore a crisp white jumpsuit, featuring flared pants and a chunky belt around her waist. The gorgeous blonde opted for nude shoes and wore her hair down and straight to pull the outfit together.

Richard and Virginia weren’t the only stars to enjoy the premiere of the 2018 film.

The 76-year-old chose a casual white top and cream coloured pants for the screening of the much anticipated film. Bringing a pop of colour to the outfit, Ita opted for a pair of yellow, red and blue heels, while she kept her blonde locks down and straight.

Richard’s appearance at the premiere comes only weeks after the entertainment reporter revealed he will move away from morning show Today and take on a position with Today Extra instead.

Filling his place is Triple J newsreader Brooke Boney, who previously worked as a political correspondent for National Indigenous Television and SBS.

Nine’s Director of News and Current Affairs Darren Wick confirmed that Wilkins will remain the entertainment editor at Nine, but will have a greater role on the second-tier Today Extra show with David Campbell and Sonia Kruger.

“I’m really thrilled to be joining the team and so excited to be working alongside Richard Wilkins,” Boney said in a statement obtained by 9 Honey. “He’s such a legend in the business. It’s such an exciting time to be joining Nine and I am looking forward to learning from everyone on the TODAY team. As a young girl growing up in the country I watched TODAY so it’s really awesome to know it’ll be my new home.”

Are you a fan of Richard Wilkins and Ita Buttrose? What do you think of their outfits?