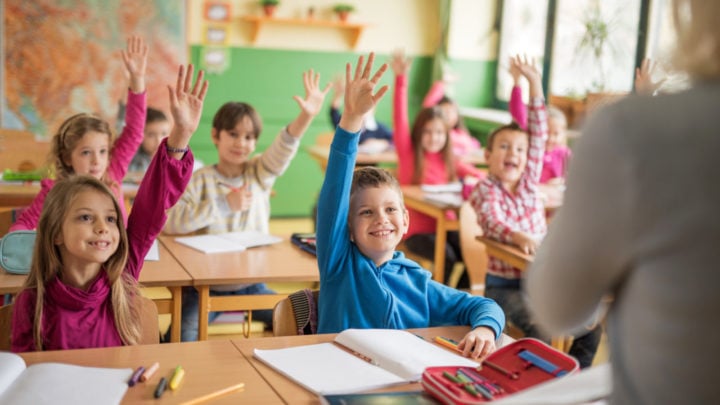 Have a laugh on us! Source: Getty.

A man went to the store with his three-year-old daughter in tow. Since he was just there to grab some essentials like milk and bread, he opted to save some time by not pushing a trolley around the store.

“That’s not the way Mummy does it,” his daughter informed him.

Leaving the store in the rain and without a trolley, he carried the bag of groceries, his daughter, and the milk quickly to the car. Not wanting to set anything down on the wet ground, he set the jug of milk on top of the car, efficiently whisked open the car door with his now free hand, scooted the groceries in and set his daughter into the car seat in one swift motion. Then he hopped in himself.

“That’s not the way Mummy does it,” his daughter informed him again.

“Honey, there’s more than one way to do things,” he replied patiently. “Daddy’s way is okay, too.”

As they pulled out and headed down the street, he became aware of the scraping sound on the roof as the jug of milk slid down the length of the rooftop, bounced off the trunk of the car and splattered to the ground, sending a froth of white milk in every direction.

In the millisecond he took to process his mistake, his young daughter looked at him, and in a most serious voice said: “That’s NOT the way Mummy does it.”

Daily Joke: A little boy asked his grandmother a question

Having been playing outside with his friends, a small boy came into the house and asked: “Grandma, what is it called when two people sleep in the same room and one is on top of the other?”

His grandma was surprised to hear such a forthright question from a six-year-old but decided to answer as honestly as she could. “Well,” she said hesitantly. “It’s called sexual intercourse.”

“Oh, okay,” said the boy and he ran outside to carry on playing with his friends.

A few minutes later, he came back in and said angrily: “Grandma, it isn’t called sexual intercourse. It’s called bunk beds. And Jimmy’s mum would like a word with you!”

Daily Joke: All the grandkids were visiting for a family gathering

All the grandkids were visiting for Christmas. Before dinner, the Grandma made a lengthy speech about being thankful for her extra-special blessings, her four grandchildren.

Two seconds after she stopped speaking, all hell broke loose and the kids were yelling and grabbing for the home-made rolls. Grandma sat there, eyes closed with a tight squint on her face.

When asked what was the matter, she replied: “I’m just praying for a little patience to handle all these blessings.”