Daily Joke: An engineer dies and goes to heaven 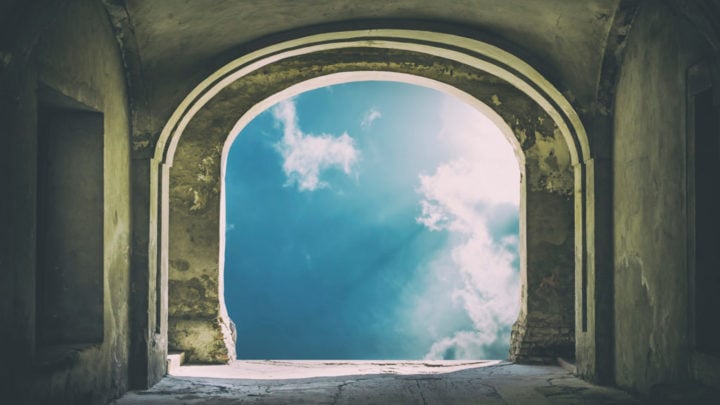 When he arrives, he meets God. Source: Getty.

One day an engineer dies and goes to heaven. When he arrives, he meets God. After checking his list in detail, God says: “Go to hell, you’re not on my list.”

So after walking the seemingly endless stairs to hell, he lets the devil know who he is and the devil welcomes him in.

In hell the engineer builds airplanes, buildings, cars and plenty more. When God gets word of all the work he’s doing, he calls up the devil and says: “Hey, you know that engineer I sent to you a while back? Yeah, well he needs to come back to heaven.”

The devil says: “Are you crazy, I’m not gonna let you have him.”

The devil laughs manically and responds: “You can’t sue! You don’t even have lawyers up there!”

Daily Joke: A man from out of town arrived in New York City

An out of towner just arrived in New York City and was amazed at the enormity of everything. Having drunk a pint or two on the flight over, he sorely needed to relieve himself.

The first door he entered happened to be a large health club, and he asked the clerk if he might use the men’s room. The clerk told him that the men’s room was the third door down the corridor on the left.

Whilst trying to appear sober, the man weaved his way down the hallway remembering only some of the directions. When he reached the third door, he turned right instead of left, opened the door and immediately fell into the deep end of a pool.

The clerk, realising the drunk man’s mistake, ran down the hall and burst through the door, prepared to save him. In the distance he heard the man shout: “Don’t flush, I’m in here!”

Daily Joke: A boy had just gotten his driver’s licence

A boy had just gotten his driver’s licence and asked his father if they could discuss his use of the car. His father said: “I’ll make a deal with you. You bring your grades up from a C to a B average, study your Bible a little, get your hair cut and we’ll talk about the car.”

The boy thought about it for a moment, and settled for the offer. After about six weeks they went in to the study, where his father said: “Son, I’ve been really proud. You’ve brought your grades up, and I’ve observed that you have been studying your Bible, and participating a lot more in the Bible study groups. But, I’m real disappointed, since you haven’t gotten your hair cut.”

To this his father replied: “Did you also notice they all walked everywhere they went?”