Why a better sleep makes for healthier ageing 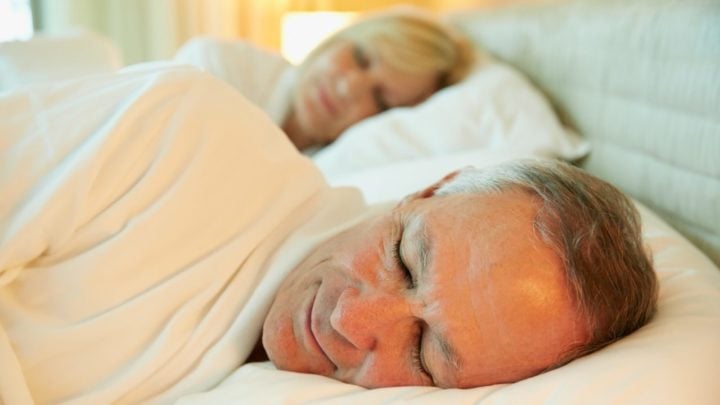 It’s normal to experience changes in sleep patterns as we age, but some sleep problems can impact overall health and the ageing process. Source: Getty

Most Baby Boomers already know that sleep is important for overall health but as people age, it’s normal to experience changes in sleep patterns. The difficult part is figuring out whether these changes are down to the ageing process, or if there’s a bigger sleep problem at hand.

“It is common for people as they age to experience a change in their sleeping patterns usually presented as a feeling that getting to sleep is harder and then in turn staying asleep also becomes difficult,” Tim Stephenson, sleep specialist at ResMed, tells Starts at 60.

Sleep is important because it’s the body’s way of recovering and doing things that it can’t do when a person is awake. The endocrine or hormone system is activated in sleep, while the brain and cardiovascular system need sleep to rest.

“One of the functions of sleep is to act as a housekeeping service for the brain and if sufficient levels of sleep are not maintained then cognitive impairment and decline are increased,” Stephenson says. “Good quality sleep is associated with a reduction in risk of falls and hospitalisation and increases mental wellbeing and the ability to fully function during the daytime.”

One of the biggest sleep problems over-60s face is insomnia, a disorder where a person finds it difficult to fall or stay asleep. Those with insomnia often wake up during the night and can have great troubles falling asleep again. Around 44 per cent of the older population are thought to experience at least one episode of difficulty sleeping each week.

“Often the cause of issues such as insomnia are related to the medical or psychiatric conditions that become more common in an ageing society,” Stephenson explains.

For example, depression can become a bigger problem due to the death of loved ones, while loneliness can also increase the risk of insomnia.

“In some cases the insomnia can lead to the depression or vice versa but it is now known that it is common to see the two issues at the same time,” Stephenson says.

Getting to the root of what’s causing the depression in the first place will generally improve sleep and reduce insomnia. People should be getting between six and eight hours of sleep per night.

Another major issue is snoring, which can become a bigger problem with age. While it can be frustrating for partners and other family members, it can also be a sign of other sleep problems such as Obstructive Sleep Apnoea – where the walls of the throat relax and cause a blockage, resulting in difficulty breathing.

“The fragmentation of sleep patterns caused by these repetitive interruptions to breathing leads to excessive daytime sleepiness and also reduced ability to function during the daytime,” Stephenson says.

Around twice as many people over the age of 60 experience sleep apnoea compared to people aged 30-39. Famed Australian landscape photographer Ken Duncan is one of those people and explains that it was his wife who noticed his sleeping problems before he realised something was wrong.

“I think sometimes the person who’s got the sleep issues is the last person to find out. It’s usually those people around you that tell you you’ve got the problem,” he tells Starts at 60. “I think people don’t realise it because it’s a very slow thing. It’s something that builds up. I realised my energy levels seemed to be lower, I’d find myself falling asleep in front of the television and things like that.”

For sleep apnoea, treatments can vary, depending on the severity of the condition, but CPAP remains the gold standard for treatment. CPAP stands for continuous positive airway pressure and CPAP machines work by delivering positive air pressure into the airway.

Periodic Limb Movement Disorder is another big sleep issue for over-60s, where people involuntarily move their limbs during sleep. These kicks or jerks can occur every 20 seconds and hundreds of times a night, resulting in interrupted sleep and can be identified by feelings of tingling and pulling. While this condition impacts around 5-6 per cent of the general population, it increases to 40 per cent in those over 65.

“These conditions generally require medication to treat them following investigation in a sleep laboratory by a physician,” Stephenson explains.

And, because the chance of being diagnosed with a chronic medical condition increases with age, many sleep problems can actually be traced back to existing health conditions or medication and treatments that have resulted in poor sleep as a side effect.

“Pain from osteoporosis-arthritis, the effects of enlarged prostate and Parkinson’s disease are all factors that have influence on the ability to get to sleep and then to stay asleep,” Stephenson says. “Medications frequently have effects on sleep and this effect can be compounded if a person is seeing several specialists for varying conditions and the effects can be cumulative in nature.”

It’s always important to listen to your loved ones because they are often the ones who will notice symptoms of sleep issues. For Duncan, it was advice from both his family and not his GP that encouraged him to undergo a sleep test.

“I thought when my sister also said it and my wife, maybe I should go and get a sleep test. When I did that, I realised that I was actually stopping breathing and they told me the potential dangers of sleep apnoea and that’s when I started using the CPAP machine,” he says. “Just get tested. It’s a scientific thing. Don’t wonder, do the test and it will tell you what’s happening. Information creates good decisions.”

Equally, completing a sleep assessment is another important way of getting a diagnosis for a sleep problem. Because most of the symptoms are happening when a person is asleep, these assessments delve into a person’s sleeping habits.

“Often there can be a marked difference between what the person themselves perceives as their sleeping patterns and what an objective test or recording by an observer will see,” Stephenson explains. “Correct assessment by a qualified practitioner will allow application of the optimum mix of therapies. There are both pharmacological and psychological/behavioural treatments for insomnia and some people may require a mix of these options.”

GPs and health professionals can conduct sleep assessments, while there’s an array of options through apps and on the internet, such as CPAP Australia’s Online Sleep Assessment.

These tests generally give feedback on a person’s sleep symptoms and allow the person to seek the correct advice and treatment for their sleep issue. When picking an online assessment, it’s important to find one that gives education about sleep issues, as well as directions towards possible solutions or further help. The outcome of the assessment will often determine a treatment plan.

“These services, however, do require people’s honest and objective answers to the questions, and are awareness tools aimed at providing the easiest path towards doing something about their sleep issues. In many ways, this is the first step towards leading a happier, healthier, and more fulfilling life” Stephenson says.

As for Duncan, he says it’s important not to let pride get in the way of a healthy sleep.

“It’s a medical condition and you can live with it if you want to, but the quality of your life is not going to be anywhere near as good compared to when you start getting good sleep,” he says. “Good sleep is when your body starts healing itself.”

Have you ever had a sleep assessment? How is your sleep health?