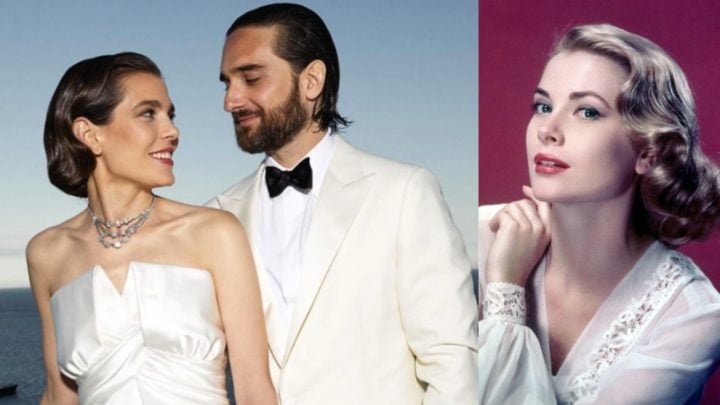 She never got to meet her grandmother, as worldwide icon Princess Grace of Monaco passed away four years before Charlotte Casiraghi was born in 1986, but the 32-year-old paid a sweet tribute to the late screen star as she tied the knot over the weekend.

Charlotte, who is the daughter of Princess Caroline of Hanover and her second husband Stefano Casiraghi, married her film producer partner Dimitri Rassam in a stunning ceremony in Monaco on Saturday.

In an official portrait shared on Facebook on the palace’s official page, the young royal looked sensational in a strapless white gown which featured a full skirt, while her dark, short locks were slicked back and she added a pop of colour with bright lipstick.

The royal bride’s wedding outfit also included a nod to the Rear Window star, as Charlotte finished off the elegant look with an eye-catching Cartier diamond necklace. According to PEOPLE, the incredible piece of jewellery appears to be the same one that her grandmother was gifted on the occasion of her wedding to Prince Rainier III in 1956.

The photo showed the newlyweds, who are parents to six-month-old son Balthazar, staring lovingly into each other’s eyes as they posed for their official photographs at royal residence Villa La Vigie.

The granddaughter of Grace Kelly opted for a far less traditional outfit as she said her vows though, stepping out in a dazzling silver mini dress, designed by Yves St Laurent, which featured three statement bows down the front.

Fans were also quick to point out similarities between Charlotte’s dress and the suit worn by her grandmother, who passed away in 1982, for her civil partnership more than six decades ago.

Royal fans offered their blessings to the royal couple on their special day too, with many leaving messages of support on social media.

One wrote: “Congratulations from my heart. Wish you much luck, happiness, health and simply the best.” Another said: “You are Wonderful! Love, health and happiness for you and your adorable children.”

While a third wrote: “Congratulations Charlotte and Dimitri on your beautiful marriage wishing you a life filled with happiness, health, love, peace, blessings.”

What do you think of Charlotte Casiraghi’s wedding outfits? Were you a fan of Grace Kelly?