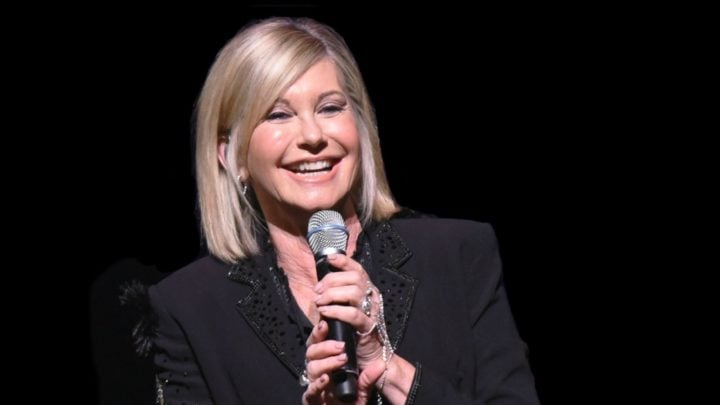 Olivia’s American representative Michael Caprio has denied the Grease star is in poor health, as fans flood social media with their concerns for the actress. Source: Getty

Fans of Olivia Newton-John were shocked on Wednesday following reports that claimed the Grease star only had weeks to live following a battle with cancer. The star’s name was a trending topic on Twitter, while countless articles flooded the internet claiming the Aussie icon was on her deathbed.

Website Radar Online made sensational claims that the 70-year-old’s body was shutting down, while an array of online outlets around the world claimed sources close to the singer told them she had weeks and not months to live.

Speaking exclusively to News.com.au, Olivia’s American representative Michael Caprio denied this was the case. He reportedly told the publication the reports were “hilarious”.

“No she has not,” Caprio told news.com.au. “You might want to get better sources versus reading tabloids.”

Meanwhile, other sources told the publication Olivia “is perfectly well and had enjoyed the Christmas and New Year period”.

It hasn’t stopped fans from sending their well-wishes to the star on social media.

One tweet read: “Saddened by the terrible news @olivianj reportedly has only weeks to live. What a remarkable Australian woman who has brought so much happiness to so many people throughout her life.”

Another fan said: “Just heard the news that Olivia Newton John has weeks to live. Life is precious, guys. Say the things you want to say to people. Hug who you need to hug because you don’t know what’s around the corner. Have no regrets.”

A third added: “Just read the most disturbing report that says Olivia Newton-John is clinging to life and has merely weeks to live. I sincerely hope this is a false report and that she’s winning this latest cancer battle.”

Just read the most disturbing report that says Olivia Newton-John is clinging to life and has merely weeks to live.

I sincerely hope this is a false report and that she's winning this latest cancer battle. pic.twitter.com/VB09ImLx7X

The ‘Physical’ hit maker was originally diagnosed with cancer in 1992 but in an interview with Sunday Night last year, confirmed she was battling cancer again. It was her third cancer diagnosis, after keeping her second cancer battle secret from the public.

Olivia had discovered the tumour in her right shoulder after she was involved in a car accident, around the time her sister Rona died from an aggressive form of brain cancer in 2013.

When she first felt the lump in her shoulder shortly after, she assumed it was a result of the seatbelt slamming in to her during the crash. Sadly, it was actually the breast cancer she had beaten two decades before returning.

She insisted on the show that she wanted to keep this second diagnosis secret, as it felt personal after sharing her first battle so widely with the public years before.

“I thought ‘I don’t really need to share this, it’s my life and something I wanted to keep to myself’,” she told reporter Alex Cullen.

In another chat with Starts at 60 in 2018, the actress also confirmed that she remains positive by “living in the now”.

“We only have now, so being in any other way doesn’t make any sense. Looking back, it’s too late, looking forward you don’t know, so be here now!” she explained. “Make your plans and whatever you think, do that and put it to one side, but don’t dwell on it. That’s my thinking. But also, it’s really good to have intentions for things you want to do in the future, because you create that reality for yourself.”

At the time of publication, Olivia had not publicly released a statement about the new reports of her health.

Are you a fan of Olivia Newton-John?