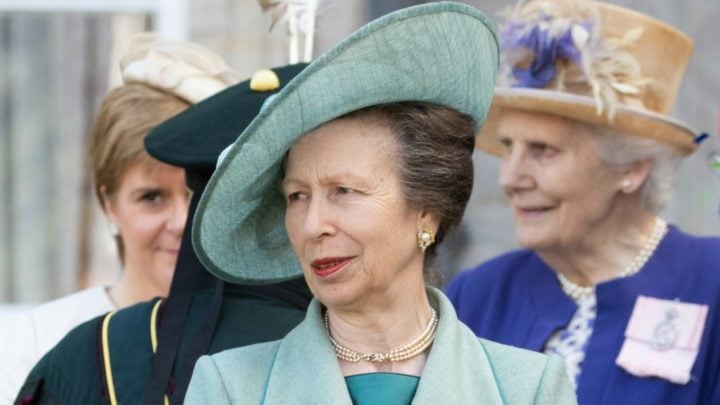 Princess Anne has stunned in one of her most fashionable outfits to date, joining Queen Elizabeth, Prince Andrew, Prince Edward for a special garden party in Scotland. Source: Getty

She’s one of the busiest royals and Princess Anne has stunned in one of her most fashionable outfits to date.

The Princess Royal is currently in Scotland for her latest royal engagements and was a very special guest at a garden party hosted by the Queen.

The 68-year-old joined Queen Elizabeth, the Duke of York and thousands of guests for this year’s annual Garden Party at the Palace of Holyroodhouse in Edinburgh. This year, 10,000 people were invited to the garden party where 27,000 cups of tea, 20,000 sandwiches and 20,000 slices of cake were consumed.

The party is a way for the Queen and other members of the royal family to speak to a broad range of people from all walks of life. These guests have made a positive impact in their community and they’re typically representatives from churches, local governments and local societies.

The Holyroodhouse party is one of four garden parties hosted by the Queen, but is the only one hosted in Scotland. The other three are held at Buckingham Palace.

Gentlemen usually wear morning dress or lounge suits to the event, while women opt for day dress and commonly accessorise with hats or fascinators. The Queen was guarded by the Royal Archers, which marched in ahead of the royal guest to kick off the event.

Each year Her Majesty hosts Garden Parties at Royal Residencies to thank people for the positive impact they make in their communities.

For the outing, Princess Anne opted for a pale turquoise coat dress, complete with a matching hat. She accessorised with a white pair of gloves, a pair of heels and a matching purse. Anne was photographed mingling with guests and even posed alongside Prince Andrew, Prince Edward and the Queen.

The Queen opted for a bright pink outfit and hat and met members of the Auxiliary Territorial Service (ATS) during the afternoon. It was a particularly special reunion, given the Queen worked as a mechanic and driver with the ATS during World War II.

Holyrood Week — also known as Royal Week to the Scottish — celebrates the very best of Scottish culture and the achievements and history of the local community. Over the course of the week, the Queen embarks on numerous engagements and travels across the country to meet people in many of Scotland’s communities. She’s often joined by other members of the royal family.

The festivities kicked off on the forecourt of Holyrood Palace in Edinburgh last week with the Ceremony of the Keys. This ancient ceremony occurs each time the Sovereign visits the city.

Are you a fan of Princess Anne and her fashion?