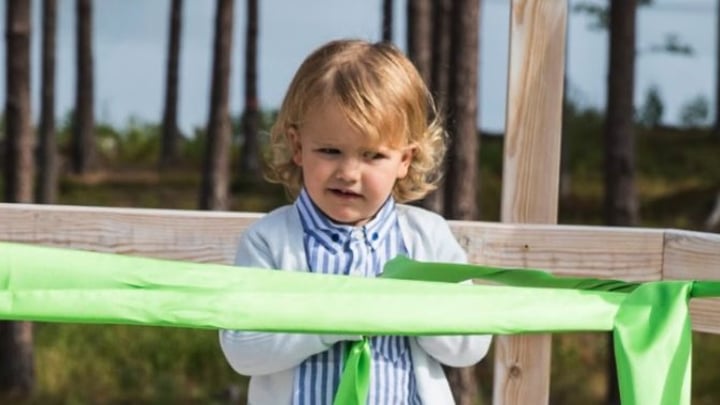 It didn’t seem much could compete with Princess Charlotte’s adorable wave, but this young royal has given the youngster a run for her money.

The Swedish royal family stepped out in style as they visited Nynas Nature reserve to open the Prince Alexander Viewpoint on Thursday. But it was two-year-old Prince Alexander who stole the show, waving to well-wishers as he attended his first royal engagement.

Following in the footsteps of his cousins Princess Estelle and Princess Leonore, who also made their official debuts at the same age, the young royal was joined by parents, Princess Sofia, 33, and Prince Carl Phillip, 39.

Alexander, who is fifth in line to the throne, wore a blue-and-white striped shirt, brown trousers and a grey cardigan for his big day. Meanwhile, the ever-stylish Sophia looked effortlessly chic in white trousers, a navy blouse, teamed with a pair of white sneakers. She wore her hair our in soft loose waves and opted for minimal makeup for the occasion.

Carl also looked dapper in a grey sports jacket which he teamed with a crisp white dress shirt.

The family rode in a carriage before their little one pulled a ribbon to inaugurate the lookout. A confident Alexander was quick to melt hearts, waving adorably at photographers.

It comes after the royal family put on a glamorous display to celebrate the christening of the youngest member of the Swedish royal family in June – Princess Adrienne, who’s just three months old – on a beautiful summer’s day that they celebrated in floral frocks and flowery head-pieces.

Baby Adrienne’s mother is Princess Madeleine, while her father is British-American banker Christopher O’Neill, who doesn’t have a title because he chose not to take Swedish citizenship. Madeleine is the second daughter and youngest child of Sweden’s King Carl and Queen Silva.

Are you a fan of the Swedish royal family?