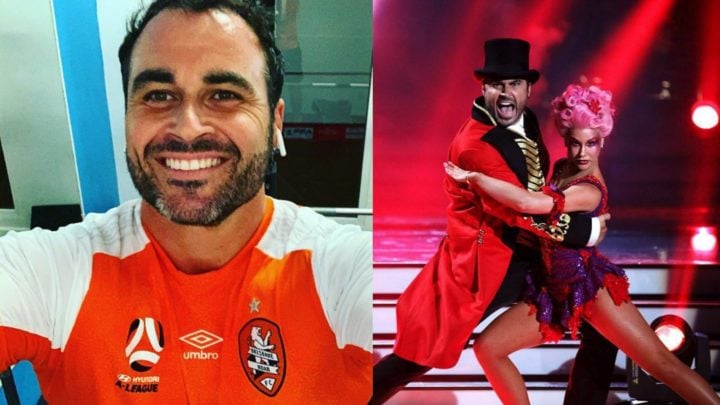 He’s known on The Living Room as the bubbly and hilarious co-host and resident chef, but Miguel Maestre has now revealed that stepping up to appear on national TV show Dancing With The Stars pushed him to limits he never expected – and the pressure almost became overwhelming.

The 39-year-old TV star was the first to be eliminated from the dance contest alongside his professional partner Megan after training for weeks to show off his moves in front of the judges.

But, speaking in an exclusive chat with Starts at 60, he has now admitted the tough journey taught him a lot about his mental health – and the incredible role his family and friends play in his happiness.

“I was trying to represent all the collective chefs of Australia and trying to be very strong in my mind,” he explained. “I am a strong person, I’ve worked my arse off in a kitchen all my life and people think I’m tough and always happy, but I almost crumbled on national TV when the people said I had to go home, because that was a real moment… I look back now and I feel like I was almost going to crumble.

“People called me the next day and everyone asked me if I was okay, and all that support from friends – even when you think you’re being strong and you’re really tough – the support of people around you and being positive can help you through anything.”

Tune in tonight for your next @thecrazybull dancing fix!! this time the ….. Taaaaango!!!!!💃🕺and don't forget to please vote vote vote to keep us safe🙏 vote online (link on my bio) and also text Miguel to 19951010 Thankyouuuuuuu😘xxxxx @dancingon10 #dancingon10#tango#channel10

Miguel said the biggest lesson he learnt on the show was understanding that there will always be a friend to talk to when times get hard – insisting that “a conversation with the right friend could save people’s lives”.

Asked what he found the hardest part of being on DWTS, Miguel said: “I felt like I wasn’t good enough. In life, people are always going to judge your life, and life isn’t all sunshine and butterflies…But you have to assume that you’re going to stand up again.

“No-one is 100 per cent happy all the time or 100 per cent good at everything, all you can do is try your best and that’s good enough.”

Offering advice to anyone who is worried about a loved one, Miguel said the most important thing is to keep a constant eye on them and start a conversation with them if you’re at all worried.

So excited to finally be able to announce that I will be partnering this absolute culinary legend.. the one and only Miguel Maestre @thecrazybull on this season of Dancing With The Stars australia on 10! @dancingon10 We are rehearsing hard already and having the best time! trust me from what I’ve seen so far your in for real show!! 💃🕺🏻😍😆

“One right question at the right time could save a life,” he added. “That is a massive problem in Australia, mental health and the suicide rate is massive here. So a little conversation can go a really long way.”

All in all, Miguel said DWTS was an enjoyable experience for him, thanks mainly to the constant support of his friends and people he loves – all of whom made him feel “invincible”.

A huge inspiration for Miguel has been his close friend and colleague Barry Du Bois, who has remained incredibly positive throughout his recent battle with cancer.

“He’s in a very positive space and he’s quite an inspiring guy,” Miguel explained. “It’s amazing, Barry has taught me that friendship can be the best medicine in the world. He will never complain, you will never see him saying, ‘I’m tired’ or ‘I’m not feeling well’.”

Asked if watching Barry’s battle has made him more aware of his own health, Miguel said: “Yeah, it’s amazing. I had never checked before the whole thing with Barry and I actually am 39 and I did a full check not long ago.”

Miguel ultimately went on DWTS to help raise money for mental health awareness, and he said it’s a cause that has always been, and will always be, very close to his heart.

“I had the time of my life,” he said. “I put my life on hold for several weeks, and was partnered with a professional dancer. It was really hard because it was from 5 in the morning until 3pm in the afternoon every day. I lost 12kg you know, I look like a skinny chef myself now!”

Miguel recently returned to the new series of The Living Room alongside Barry and their co-hosts Amanda Keller and Chris Brown. It is now airing on Channel 10 on Fridays at 7.30pm.

Are you a fan of Miguel Maestre? Have you or anyone you know suffered from mental health issues, and found it helpful to speak to loved ones?