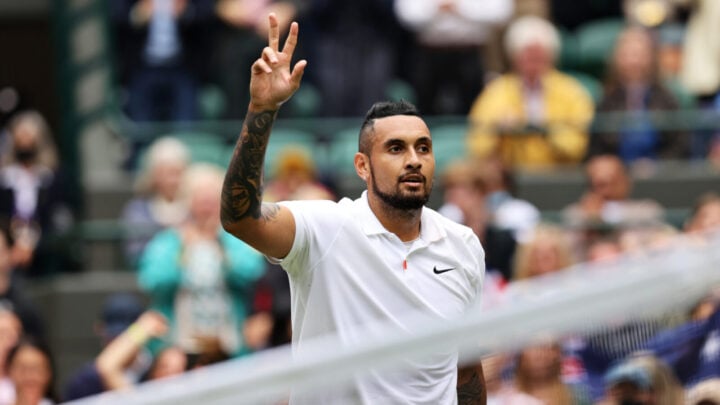 Kyrgios was on his best behaviour for Monday night's match but the tennis star took joy in silencing his critics. Source: Getty Images.

Nick Kyrgios has advanced to the Wimbledon quarter-finals after overcoming a shoulder injury to beat American Brandon Nakashima in a five set win on Centre Court.

“He was playing really well. I wasn’t playing that great. But I was almost enjoying the competitiveness,” Kyrgios said.

“That’s probably the first time in my career where I wasn’t playing well, regardless of playing Centre Court Wimbledon, fully packed crowd, (and) I was able to just say, ‘Wow, look how far I’ve come’, to myself. I was bouncing the ball before I served. I really just smiled to myself. I was like, ‘We’re here, we’re competing at Wimbledon, putting in a good performance mentally’.”

Back in the #Wimbledon quarterfinals for the first time since 2014 ????

Kyrgios shrugged off questions about his shoulder injury, simply stating that he has “played a lot of tennis in the past month and a half” but did joke that he would need “a large glass of wine tonight for sure”.

“I’m proud of the way I steadied the ship. My five-set record is pretty good, that’s what I was thinking about, I’ve never lost a five setter here,” he said.

“I need a glass of wine for sure tonight!”

Although Kyrgios was on his best behaviour for Monday night’s match the tennis star took joy in silencing his critics.

“I sit here now in the quarter-finals of Wimbledon again, and I just know there’s so many people that are so upset,” Kyrgios said.

“As far as gamesmanship, cheating, manipulation, abuse, aggressive behaviour to umpires, to linesmen … he was lucky to even get through the first set, he should have been defaulted in the first set,” Cash said.

“Something’s got to be done about it, it’s just an absolute circus.”

Despite the backlash from his recent on court antics and his niggling shoulder concerns, Kyrgios feels “extremely bleesed” thanks to his crew of support.

“My physio is one of my best friends. My best friend is my agent. I’ve got the best girlfriend in the world. I’ve just got so many people around me, they just support me.

“I feel like I can reflect on all those dark times when I pushed them all away. Now to sit here, quarterfinals of Wimbledon, feeling good, feeling composed, feeling mature, having that around me, I’m extremely blessed. I feel like I’m just comfortable in my own skin.”

Kyrgios will next face off against Chile’s Cristian Garin for a place in the semi-finals.