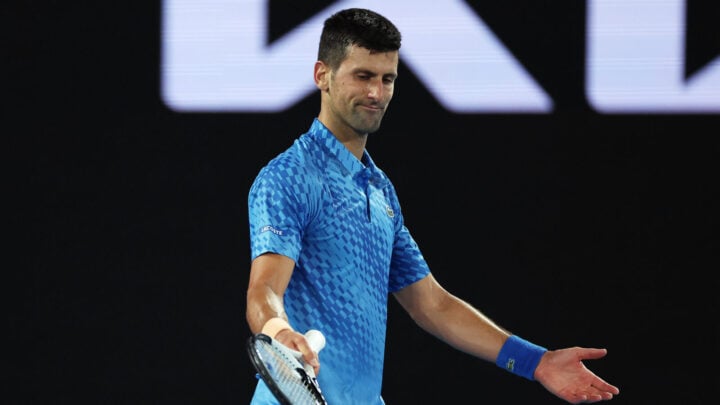 Radio host Neil Mitchell has taken a public swipe at tennis star Novak Djokovic, calling for the 35 year old to be deported again for being “extremely ungracious”.

Mitchell’s dig at Djokovic follows the tennis star’s 6-2 6-1 6-2 victory over Alex de Minaur in the fourth round of the Australian Open on Monday, January 23.

Although, Mitchell held no ill will towards Djokovic for his victory he did take issue with his comments in his post match press conference which seemingly disparaged de Minaur.

Following the match, Djokovic claimed he doesn’t” have any relationship” with his competitor before referring to de Minaur’s comments regarding his deportation saga in 2022.

“I respect him as a rival, a colleague, as I respect everyone. I have no problem contacting him, congratulating him, etc,” Djokovic said.

In 2022 de Minaur weighed in on Djokovic’s deportation saga, claiming that “when you’re coming in, as well as every other tennis player, if you wanted to come to the country, you had to be double vaccinated.”

“It was up to him, his choices, his judgment,” he said at the time.

Regardless of what spurred Djokovic’s recent comments, Mitchell took issue with Djokovic’s approach claiming that “it was obvious Novak Djokovic bore a grude”.

“(From) what I’ve been reading, Novak Djokovic can get nicked,” Mitchell said to his 3AW listeners.

“Novak Djokovic … I don’t really care about the tennis but I hope he doesn’t win.

“In Serbian he has given Alex de Minaur a real spray after the game because de Minaur had a bit of a go at him a year ago when he was banned and then deported.

“And it was obvious Novak Djokovic bore a grudge and was determined to wipe him off the court, which he did.

“But then he was extremely ungracious in his victory and in a foreign tongue.

Djokovic’s 2022 deportation sage proved to be a tumultuous time for the tennis star, after his visa was cancelled over his vaccination status which prevented him from competing in the Australian Open.

Djokovic’s visa was cancelled after arriving at Melbourne’s Tullamarine Airport at around 11:30 pm on Wednesday, January 5. Following a court battle on January 10, the tennis star won his battle to stay in Australia and had his visa cancellation overturned. Judge Anthony Kelly ordered the visa cancellation to be overturned claiming it “was unreasonable.”

Following the court’s decision, Immigration Minister Alex Hawke announced the cancellation of Novak Djokovic’s visa for a second time. Hawke said he was cancelling Djokovic’s visa, “on the basis that it was in the public interest to do so”.

JUST IN | Novak Djokovic under AFP escort in the lounge at Melbourne Airport ahead of his flight back to Europe via Dubai next hour. #AusOpen pic.twitter.com/Mb47tW76VC

Djokovic was spotted leaving Australia at Melbourne’s Tullamarine airport at 10:30pm on Sunday, January 16 flanked by Australian Federal Police (AFP) officers as he boarded an Emirates flight to Dubai.

Djokovic was facing a three year ban from entering Australia, however, the Federal Government overturned the ban recently which allowed Djokovic to compete in this year’s Australian Open.