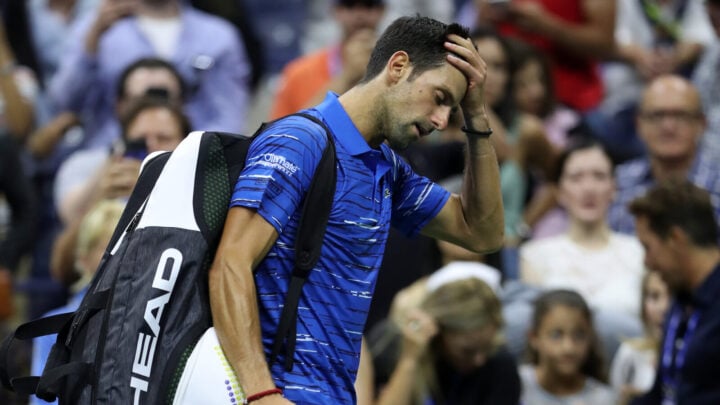 An announcement on Djokovic's fate expected to be made on Friday, January 14. Source: Getty Images.

The Federal Government has announced the cancellation of Novak Djokovic’s visa for a second time, just days out from the Australian Open.

Immigration Minister Alex Hawke announced he was cancelling Djokovic’s visa, “on the basis that it was in the public interest to do so”.

“Today I exercised my power to cancel the visa held by Mr Novak Djokovic on health and good order grounds,” he said in a statement.

“In making this decision, I carefully considered information provided to me by the Department of Home Affairs, the Australian Border Force and Mr Djokovic.

“The Morrison government is firmly committed to protecting Australia’s borders, particularly in relation to the COVID-19 pandemic.

“I thank the officers of the Department of Home Affairs and the Australian Border Force who work every day to serve Australia’s interests in increasingly challenging operational environments.”

Djokovic’s lawyers are expected to challenge the second visa cancellation.

EARLIER :
Whether Novak Djokovic will be able to stay in the country and defend his Australian Open title remains a mystery as Immigration Minister Alex Hawke is yet to make an announcement on the tennis star’s possible visa cancellation.

Hawke has been considering cancelling Novak Djokovic’s visa again for several days with an announcement on Djokovic’s fate expected to be made on Friday, January 14 but no such announcement has been made despite rumours he is leaning towards deportation.

Hawke announced in a statement to 9 News on January 11 that he still had the “personal power” to cancel Djokovic’s visa.

“The Minister is currently considering the matter and the process remains ongoing,” the statement said.

Senator Jacqui Lambie seems to have run out of patience with the Immigration Mister and demanded an answer while on Channel 9’s Today.

“Maybe it’s about time to stop this debacle, finish it once and for all,” she said.

“Make up your mind, Alex Hawke, and where are you? Missing in action? Make a decision.

“If you can’t make a decision on Novak Djokovic, goodness me, how are you guys running the country? This is an absolute shambles. Let alone what it’s making us look like in the face of the rest of the world. It’s absolutely a shocker.”

Djokovic won his battle to stay in Australia and has had his visa cancellation overturned on January 10.

Judge Anthony Kelly ordered the visa cancellation to be overturned and for Djokovic to be released from immigration detention, claiming the cancellation “was unreasonable”.

During the hearing, Judge Kelly questioned “what more could this man have done?” in regards to the medical exemption Djokovic believed was valid.

“Here, a professor and a physician have produced and provided to (Djokovic) a medical exemption. Further to that, that medical exemption and the basis on which it was given, was given by a (panel) established by the Victorian Government,” he said.

“That document was in the hands of the delegate. The point I am somewhat agitated about is what more could this man have done?”

Lawyers for Djokovic told the court their client was “utterly confused” by the situation as he believed he had done everything that was expected of him and that he was of the understanding that he “ticked every box”.