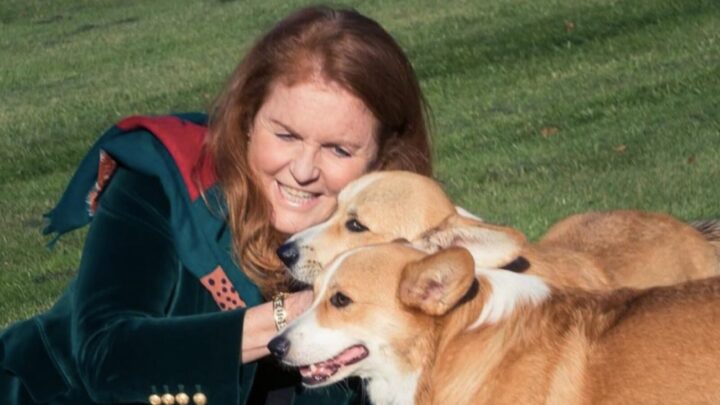 Sarah “Fergie” Ferguson, Duchess of York, is absolutely thriving as the new step-mum of the late Queen’s corgis, and her latest photo with the adorable pooches proves it.

The Duchess of York, who celebrated her 63rd birthday on October 15, decided to commemorate her special day by sharing a handful of photos of herself with beloved royal corgis Muick and Sandy.

In the photos posted on Instagram, Ferguson is seen laying on lush green grass, cuddling the dogs, as the trio enjoy a sunny day out.

Fans of the Duchess gushed over the heartwarming photos, remarking on how “blessed” the dogs were to have her and are “glad they got a loving home”.

“My heart melts at this… It’s a lovely site to see Sarah. It’s important that a pet gets home after its caregiver passes. And yours is a true honour. What a beautiful gift of trust to you. There are charities that do this. Enjoy your bonding,” one royal fan wrote.

“Brilliant Sarah and I’m sure you give them a loving happy life x what a blessing they are with you,” another added.

The sweet snap comes a month after it was announced that Fergie and her ex-husband, Prince Andrew, would be taking care of the dogs following the Queen’s passing in early September.

Speaking to The Telegraph, Ferguson had said it was a “big honour” to be Muick and Sandy’s new caretaker, adding that the four-legged royal family members were “national treasures” and had “been taught well”.

Per People, Fergie has assured that both Muick and Sandy have fit right in with her five Norfolk terriers and have totally made themselves at home at the Royal Lodge.

“They all balance out, the carpet moves as I move but I’ve got used to it now,” she joked.

As reported by Vanity Fair, the Queen had no intention of having more dogs after the death of her beloved Monty in 2012, explaining that “she didn’t want to leave any young dog behind. She wanted to put an end to it” but when her pup Whisper died in 2018, Her Majesty was gifted two more corgis- Fergus and Muick- by Prince Andrew.

Following the death of her husband, Prince Philip, and Fergus in 2021, her granddaughter- Fergie’s eldest daughter- Princess Beatrice gifted the Queen yet another corgi puppy, Sandy.

According to the Mirror, Her Majesty had only accepted her final two corgis, if Andrew and Beatrice agreed to take care of them after she died.

Although news of Andrew’s new role as the corgis caretaker sparked a considerable online backlash, Animal behaviour expert, Dr Roger Mugford- who was once hired by the Queen to help manage her corgi pack-believes the dogs are in good hands, saying they would be happy living in the familiar surroundings of the Prince’s home in Windsor.