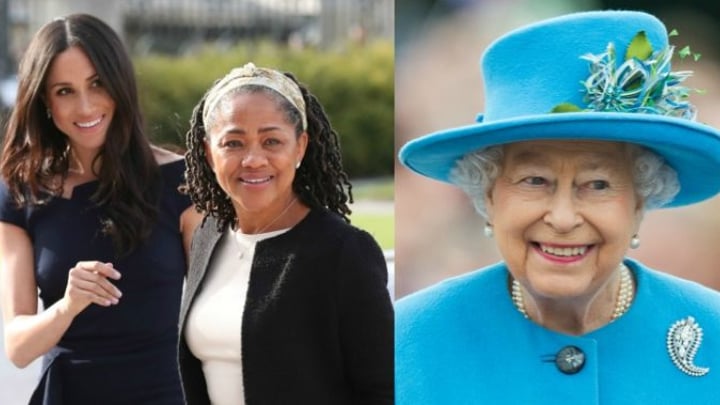 According to reports, Doria Ragland will spend Christmas with the royal family in England. Source: Getty

The Queen is well known as a stickler for tradition, but when it comes to the Duchess of Sussex it appears she’s willing to bend the rules.

According to multiple reports, the Queen has broken decades of tradition and invited Meghan’s mother Doria Ragland to spend Christmas with the royal family at their Sandringham estate in Norfolk.

The royals spend every Christmas at the sprawling estate in the south of England and while usually only official members of the royal family are allowed at the table, the Queen has extended an invitation to Doria so she can be with her daughter and son-in-law for the special day.

A report published in Vanity Fair on Monday cited sources who said the Queen was “very impressed” by Doria when they met ahead of Meghan and Prince Harry’s wedding and that she was aware the festive season would be tricky for the pregnant duchess, who would understandably want to spend time with her mother.

“The Queen knows that Meghan’s family situation is complicated and that the easiest way for Meghan and Harry to be together and with Doria, which is what they want, is for them all to join her at Sandringham where there is plenty of space,” they said. “It’s not the norm but then things seem to have changed quite a lot recently.”

It’s the second year in a row the Queen has made special exceptions for Meghan at Christmas. Last year she invited the then newly engaged actress to spend Christmas with the royals, breaking years of tradition that decreed only those who had married immediate members of the royal family could join them at the lunch table.

Royal reporters who have followed Meghan’s two-year journey from Harry’s girlfriend to fully minted royal member say the Queen was immediately taken with her and believes she is a wonderful match for Harry.

Her approval likely grew further following the duke and duchess recent Commonwealth tour, during which Meghan proved herself as a thoughtful and thoroughly modern young woman. The palace announced Meghan was pregnant on the first day of the couple’s visit to Australia, but the duchess didn’t let the hectic schedule phase her, and only missed two official engagements during the 16-day tour.

This year’s Christmas celebration at Sandringham is expected to be particularly joyful for the royal family, which has celebrated a royal baby, royal baby announcement, royal wedding and Prince Charles’s 70th birthday all within the last 12 months.

Do you think it was kind for the Queen to invite Doria to Christmas? Are you glad to see the royals embracing Meghan and her mother?