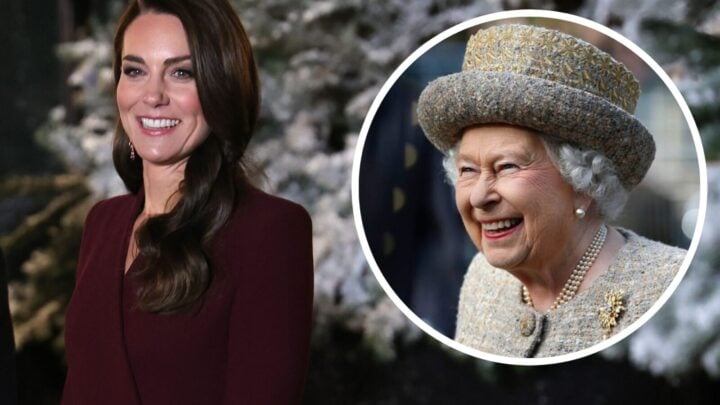 The Princess's tree-planting ceremony comes ahead of the Royal Christmas carol service, which she has now hosted for the second year in a row. Source: Getty

With Christmas just around the corner, the Royal Family have been making arrangements to commemorate the late Queen Elizabeth II as they mark their first Christmas season without the beloved great-grandmother and monarch.

To honour her late grandmother-in-law, Catherine, Princess of Wales, has planted a wild cherry tree on the grounds of Westminster Abbey as part of the Queen’s Green Canopy, a nationwide initiative to mark the Queen’s Platinum Jubilee.

Photos of the ceremony were shared online by the Abbey’s official Instagram page, showing the 40-year-old mother of three greeted by the Dean, the Very Reverend Dr David Hoyle and members of the Chapter of Westminster.

For the event, Catherine wears a green and blue tartan coat over a dark green, knitted turtleneck dress, which she paired with blue suede knee-high boots.

“Her Royal Highness The Princess of Wales dedicated a tree in Dean’s Yard at Westminster Abbey to mark the memory of Her Late Majesty Queen Elizabeth II,” the caption reads.

“The tree is a wild cherry tree (Prunus avium Plena) from the estate of the Duchy of Cornwall. It replaces a horse chestnut tree that was rotten and suffered with Summer Sudden Limb Drop earlier this year.

“The Princess shovelled the last spadefuls of earth onto the tree and unveiled by a plaque which reads: This wild cherry tree, a gift from the Duchy of Cornwall, was dedicated in memory of Her Late Majesty Queen Elizabeth II by Her Royal Highness The Princess of Wales on 14th December 2022.”

A post shared by The Queen’s Green Canopy (@queensgreencanopy)

The Princess’s tree-planting ceremony comes ahead of the Royal Christmas carol service, which she has now hosted for the second year in a row.

Catherine had dedicated the service to the late Queen Elizabeth II in honour of her “incredible legacy”.

She was joined by her husband Prince William and their two older children, Prince George and Princess Charlotte, as well as King Charles III and Queen Consort Camilla.

During the program’s introduction speech, Catherine said she was “thrilled” to have been able to invite the public to the Abbey once again for another year of the special Christmas event.

“This Christmas will be our first without Her Late Majesty Queen Elizabeth,” she said.

“Her Majesty held Christmas close to her heart, as a time that brought people together and reminded us of the importance of faith, friendship and family, and to show empathy and compassion.

“This year, we’ve invited hundreds of inspiring individuals to the service. Those who showcase the power of connectedness and community values, allowing us to continue Her Majesty’s tradition of recognising and thanking those who have gone above and beyond to support others.

“Her Majesty leaves with us an incredible legacy and one that has deeply inspired many of us.”

Catherine then dedicated the service to the late monarch and “all those who are sadly no longer with us”.

“So, whilst Christmas will feel very different this year, we can still remember the memories and traditions we shared,” she continued.

“Take time to slow down and celebrate with family and friends all the wonderful things that make Christmas so special.”

Royal Carols: Together At Christmas will air at 7 pm on Christmas Eve, December 24, on ITV1.