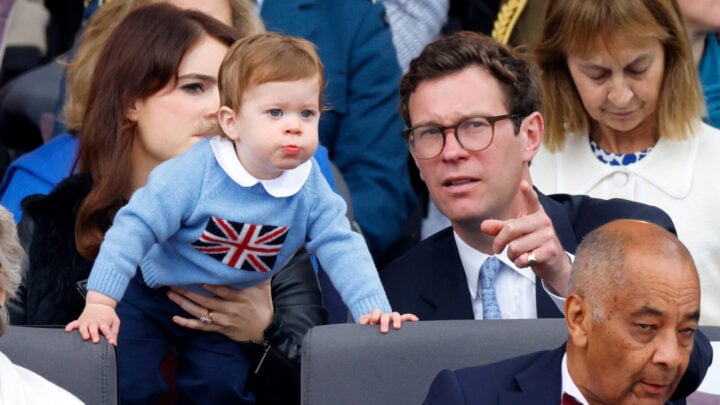 In several shots from the event, August is spotted taking in all the sights and sounds of the festivities. Source: Getty Images.

Dressed in a blue sweater emblazoned with the Union Jack, August appeared alongside his parents in the royal box during Sunday’s Platinum Jubilee Pageant.

It’s the first time the adorable royal has been spotted in public and although Eugenie has shared several images of the youngster on social media she has been careful to obscure his face.

In several shots from the event, August is spotted taking in all the sights and sounds of the festivities which included performances from musicians such as Ed Sheeran, acrobatic displays and carnival floats.

Princess Eugenie shared some of her own photos and videos from the day on social media, which included young August standing on his dad’s lap as he waved and pointed toward the crowd.

“The Platinum Jubilee Pageant was just incredible. To all the people that took part, organised it, made it flawless for us all watching, THANK YOU. You made us all so proud,” Eugenie captioned the post.

Royal fans were quick to share their delight after their first glimpse of little August.

“So wonderful to actually see August’s face. What a sweetheart he is.”

“Your son is adorable. I’ve always respected you not showing us his face due to privacy but thank you so much for sharing him with us today. He’s a beautiful child,” commented another.

Also making his first royal appearance was Christopher Woolf, who is the son of Beatrice’s husband Edoardo Mapelli Mozzi and his ex, Dara Huang.

The Platinum Jubilee Pageant marks the final day of celebrations for the Queen’s 70 year reign which followed a whirlwind four days of festivities for the people of the United Kingdom.

The 96-year-old is the longest-serving British monarch in history, after being proclaimed Queen on February 6, 1952, at the age of 25, following the death of her father King George VI.

The Queen’s Platinum Jubilee celebrations kicked off when the Royal Family gathered together for the highly-anticipated annual Trooping of the Colour on June 2, 2022.

The Monarch beamed as she was pictured enjoying intimate moments alongside close family members on the famous Buckingham Palace balcony to watch the highly-anticipated annual fly-by. Her Majesty wore a gorgeous long-sleeve, baby blue dress, with stunning golden lace, embellishing the neck and running down the front trim of the dress.

The Queen delighted royal watchers when she attended the lighting of the jubilee beacon on June 2, at Windsor Castle after withdrawing from the St Paul’s Cathedral Service of Thanksgiving on Friday, June 3.

The beacon lighting is an age-old tradition for celebrations such as royal weddings and coronations. The event now symbolises the unity between the United Kingdom and the Commonwealth.

Thousands of people took part in celebrations throughout London to mark the Queen’s 70 years on the throne.