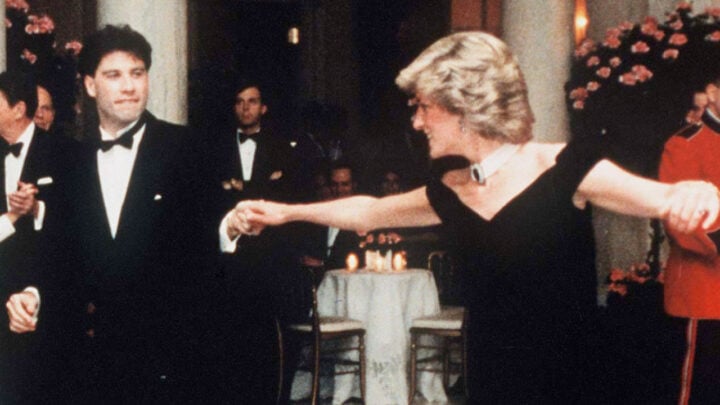 When it comes to royal fashion, no one did it better than the Princess of Wales, and her iconic fashion choices live on in the hearts and minds of her supporters around the world to this day. And now, one of Princess Diana’s most famous gowns has been put on display, more than three decades after she first stepped out in it.

The dress in question is a ruched, midnight-blue number designed by Victor Edelstein, and it was worn by the late Princess of Wales when she attended a state dinner at the White House in 1985. If the grandure of the event wasn’t enough for the dress to go down in fashion history though, Diana was also photographed dancing with Grease star John Travolta that same night.

Fans of Diana’s style can now get a glimpse of the dress close-up, as it was put on display at Kensington Palace this week, as the historic palace reopened to the public as coronavirus restrictions continue to ease across parts of the United Kingdom. The palace was closed for four months as a result of the pandemic.

The dress was purchased at auction by Historic Royal Palaces – the charity that manages Britain’s royal palaces – last year for a sum of £264,000. At the time, Eleri Lynn, curator at Historic Royal Palaces, said in statement: “We’re delighted to have acquired this iconic evening gown for the royal ceremonial dress collection – a designated collection of national and international importance – over 20 years since it first left Kensington Palace.

“Not only is the ‘Travolta’ dress a fantastic example of couture tailoring designed to dazzle on a state occasion, it represents a key moment in the story of 20th-century royal fashion.”

Kensington Palace reopened to the public today. And they’re finally able to put on display the Princess Diana dress in which she danced with John Travolta at the White House in 1985.
The “Travolta dress” was won by at auction by @HRP_palaces last year 👗pic.twitter.com/KjtgdNmbXq

It’s not the first piece of royal fashion to be put on display by Historic Royal Palaces, as the wedding gowns of both Meghan, Duchess of Sussex, and Princess Eugenie have both been displayed as part of special exhibitions in recent years.

Do you remember this dress?