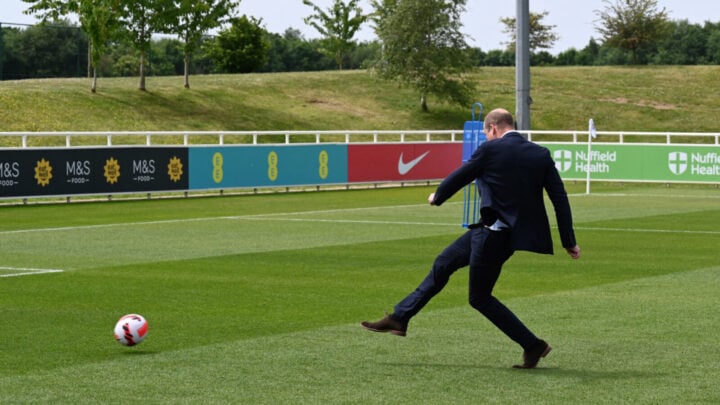 Prince William remains the current President of The Football Association which governs association football in England and the Crown dependencies of Jersey, Guernsey, and the Isle of Man. Source: Getty

The lovable Prince William has shown off his winning kick in a visit with England Women’s football team, the Lionesses, at St George’s Park on Wednesday afternoon, June 15.

In a video released on the day, Prince William is seen chatting politely with a number of the female football players as the team geared up for the upcoming UEFA Women’s Euro 2022.

Ever the ‘good sport’, the Prince later tried his hand at shooting as he joked to the women to “be kind” as he took his first shot, which was caught by the goal-keeper.

“This could go anywhere…it’s a long way for me,” the Prince joked.

After taking his first failed shot, the Prince said, “At least it’s on target, I’ll take that”, sparking a large laugh from the players.

One of the players can then be heard saying, “Give him another go”, to which a determined Prince William had no argument.

“Be kind okay, be kind,” he tells the girls before taking his next shot, scoring as the women clapped and cheered.

After the fun, the Prince shook hands with a number of the players before addressing the group with a touching speech.

“I’m delaying what you all want to know, so I’ll be quick,” he began, ever the charismatic royal.

“Hopefully you guys realise it’s a big tournament coming up and it’s exciting and everyone’s looking forward to it.

“I’m trying to add a little bit of pressure, but not too much.

“You know, you’re all trailblazers for women’s sport and women’s football so it’s been a big summer for you all.”

One of the players then handed the Prince three miniature football jerseys for his three young children, Prince George, 8, Princess Charlotte, 7, and Prince Louis, 4, William appeared truly touched by the gesture.

“Thank you, we appreciate your support,” said the player as she handed him the jerseys.

The Prince seemed particularly smitten with Princess Charlotte’s jersey as he told the players, “Charlotte wanted me to tell you that she’s really good in goal”.

“She said, please tell them that…budding star for the future,” he joked.

The Prince then posed for a team photo with the Lionesses as he held up his new jerseys, numbers 4, 7 and 8 – the ages of each of his children.

Prince William is a well known avid sports lover and supporter, regularly attending matches in the UK – his favourite team is the Birmingham based team, Aston Villa.

In 2017, on young George’s sixth birthday, photos were released of him wearing an England Lioness football jersey, as he lay carefree in the grass.

Prince William remains the current President of The Football Association which governs association football in England and the Crown dependencies of Jersey, Guernsey, and the Isle of Man – the oldest football association in the world.

The Royal family are often pictured at noteworthy sporting events, supporting their country, and celebrating their team’s successes with the most recent display of support being The Duchess of Cambridge’s new role as the face of the Rugby Football Union and Rugby Football League; a role previously held by her brother-in-law Prince Harry.

The Duchess visited Twickenham Stadium on Wednesday, February 2, and met England players from both the men’s and women’s squads before tearing across the pitch and scoring a try.