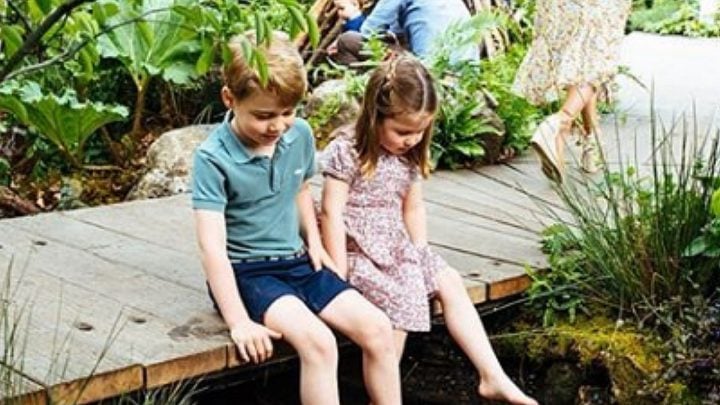 Prince George was enjoying some time playing in the garden with his family when he spoke to his dad. Source: Instagram/ kensingtonroyal

Prince William and Kate’s oldest son Prince George has been heard speaking for the first time, delighting royal fans around the world, as an adorable video was shared on social media showing the youngster playing with his siblings in mum Catherine’s beautiful garden this week.

The footage was taken at the Royal Horticulture Society’s Chelsea Flower Show in the ‘Back to Nature’ garden, which the Duchess of Cambridge helped to design, the royal family of five can be seen playing together happily as they explore their surroundings.

Little George is spotted enjoying a rope swing which hangs from one of the trees in the gorgeous space when his dad Prince William asks him to rate his mum’s design.

How many marks out of 🔟 for the #RHSChelsea Back to Nature Garden, Prince George?

“20,” George exclaims with excitement. To which William replies: “20 out of 10? That’s pretty good. I think mummy’s done well.”

The camera then pans to Kate who is seen playing with one-year-old Louis. “How amazing is that?” the duchess says with a huge smile on her face.

The couple’s only daughter Charlotte can also be heard speaking briefly as her doting dad asks the four-year-old princess to help him on the swing.

“Yeah,” she replies after he calls her. “Give me a push,” he says to his only daughter, as Charlotte then happily runs over to her dad.

The video was posted on social media by the royal family on Monday (local time) and has received a lot of attention from royal fans who were delighted to hear the children speak.

“This is so amazing,” one person commented on the Instagram post. “It is so lovely to hear George’s voice. William and Kate are such amazing parents. I love the way the whole family has joined together to support Kate on such an amazing project.”

“I love Prince George’s reaction and rating but I think I love seeing Prince William having a little fun swinging around more,” another wrote.

While a third simply said: “This is just the sweetest video.”

The royal children weren’t the only ones to enjoy the new space created by Kate with the Queen carrying out her annual visit to the RHS Chelsea Flower Show on Monday afternoon.

The Queen is a patron of the Royal Horticultural Society which organises the show, originally founded in 1913. Every year the grounds of the Royal Hospital Chelsea are transformed thanks to a gobsmacking array of colourful flowers courtesy of gardeners, florists and designers from around the world.

The Queen was remarkably close to the truth when she told Kate her garden looked tidy earlier. Before she arrived, the duchess was seen picking up stray leaves and twigs – and stuffing them into her designer handbag as she had nowhere to else to put them! #ChelseaFlowerShow pic.twitter.com/gYLXFllERm

This year, the 93-year-old monarch was joined by Prince William and the Duchess of Cambridge who gave the Queen a tour of ‘Back to Nature’. The garden was designed by Catherine with the help of award-winning landscape architects Andrée Davies and Adam White of Davies White Landscape Architects.

Her Majesty was reportedly heard complimenting Catherine on how tidy the garden looked, before royal correspondents revealed the duchess was seen picking up stray leaves and twigs and stuffing them into her handbag before the Queen’s arrival.