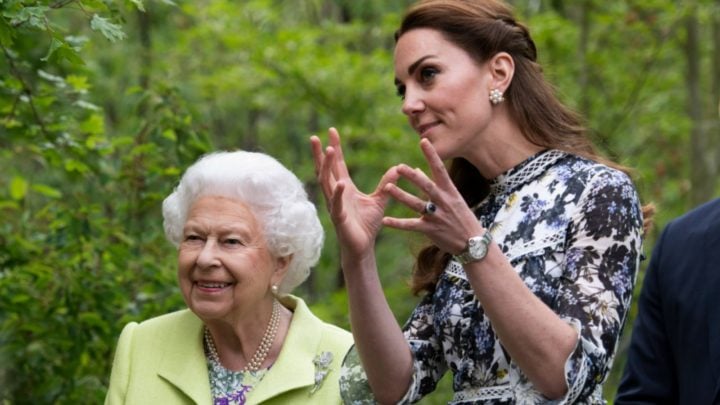 The Queen and Catherine pictured together earlier this year. Source: Getty

The Queen was all smiles as she carried out her annual visit to the RHS Chelsea Flower Show on Monday afternoon, alongside other members of the royal family.

The Queen is a patron of the Royal Horticultural Society which organises the show, originally founded in 1913. Every year the grounds of the Royal Hospital Chelsea are transformed thanks to a gobsmacking array of colourful flowers courtesy of gardeners, florists and designers from around the world.

This year, the 93-year-old monarch was joined by Prince William and the Duchess of Cambridge who gave the Queen a tour of ‘Back to Nature’. The garden was designed by Catherine with the help of award-winning landscape architects Andrée Davies and Adam White of Davies White Landscape Architects.

Her Majesty was reportedly heard complimenting Catherine on how tidy the garden looked, before royal correspondents revealed the duchess was seen picking up stray leaves and twigs and stuffing them into her handbag before the Queen’s arrival.

The Queen was remarkably close to the truth when she told Kate her garden looked tidy earlier. Before she arrived, the duchess was seen picking up stray leaves and twigs – and stuffing them into her designer handbag as she had nowhere to else to put them! #ChelseaFlowerShow pic.twitter.com/gYLXFllERm

For the occasion, the Queen stepped out in a bright mint coat and floral dress. Wearing her favourite black loafers, she accessorised with white gloves and her signature smart black leather handbag looped over one arm.

Meanwhile, the duchess looked incredible as always, sporting a floral navy and black Erdem dress, which she paired with tan wedges.

Princess Beatrice also made an appearance at the event, wearing a statement coat over a blue dress.

Catherine was also at the garden on Sunday, where she was pictured with Prince William and their three beautiful children. The super cute snaps of George, Charlotte and Louis were posted on the couple’s Instagram page from the Chelsea Flower Show.

In one image the youngest of the couple’s children Louis can be seen walking along the boardwalk with a stick in hand as older brother George plays in the background. The adorable toddler sports a huge smile on his face as father William watches on from behind.

The one-year-old was also captured in a beautiful image with his father as he sits on a swing hanging from a tree. Kate, who is often the one taking the snaps, featured alongside her youngest child as well, as she bends down beside little Louis who seems to be thoroughly enjoying his time outside.

George and Charlotte were also snapped on the family day out, sitting beside each other as they hang their feet into a creek below. In further snaps the whole family can be seen soaking up the sunshine together.