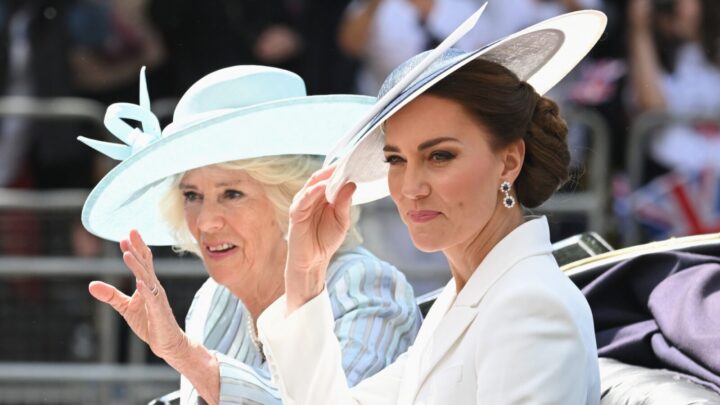 The women of the Royal Family have opted for fresh summery hues for their outfits as they gather together on the first day of the Platinum Jubilee celebrations.

The Trooping of Colour Parade on Thursday, June 2, welcomed thousands of spectators to Buckingham Palace, all eager to watch the working members of the Royal Family stand together on the iconic balcony to mark the start of the UK’s four-day bank holiday weekend.

This year’s Trooping of Colour also marks the first time Prince William, Katherine Duchess of Cambridge and their three children, Prince George, Princess Charlotte, and Prince Louis, have taken part in the parade since 2019, and the Duchess’s outfit did not disappoint.

For the historical occasion, Kate wore a stark white Alexander McQueen coat dress which the Duchess paired with a navy blue and white trimmed fascinator by designer Philip Treacy, keeping her chocolate brown locks in a perfectly elegant updo.

For accessories, the 40-year-old mother of three coordinated her jewels to her colour scheme, wearing dangling sapphire and diamond earrings with a matching necklace, which paired perfectly with her emblematic 12-carat Ceylon sapphire engagement ring.

For makeup, the Duchess kept things au natural wearing light pink lipstick and subtle blush to give her a fresh glow for the morning parade.

Sitting prim and proper, Kate rode via carriage along with her three children and her mother-in-law, Camilla, Duchess of Cornwall.

Sitting next to her daughter-in-law, Camilla, 74, looked bright and bubbly in her blue and light purple striped dress by Bruce Oldfield

Looking as chic as ever, the Duchess of Cornwall, wore a wide-brimmed blue hat also by Philip Treacy and styled her pale blonde hair in its usual 80s blowout.

In a separate carriage, Sophie the Countess of Wessex rode through the procession next to her husband, Prince Edward, and their two children, James Viscount Severn and Lady Louise.

The 57-year-old mother of two was pretty in pink as she waved to onlookers in her cream and gingham coat dress.

Like her sister-in-law, she too wore her hair in an elegant twisted low bun held down by a woven pink and white fascinator which matched the coloured of her dress perfectly.

To complete her look, Sophie opted for a pink lipstick, in a shade similar to her hat, and had a glowy complexion with subtle eye makeup. For accessories, she wore a simple pearl earring and necklace set, and two dainty bracelets on her left wrist.

After the parade, Sophie and her family stood alongside Her Majesty and other working royals for the flypast.

While in previous years, the Buckingham Palace balcony featured upwards of 40 people, this year’s group was significantly smaller.

“After careful consideration, The Queen has decided this year’s traditional Trooping the Colour balcony appearance on Thursday 2nd June will be limited to Her Majesty and those Members of the Royal Family who are currently undertaking official public duties on behalf of The Queen,” a Buckingham Palace spokesperson said.

Royal fans will not be seeing Prince Harry or Meghan Markle on the Balcony, but it is understood the Duke and Duchess of Sussex had watched the parade from the Major General’s Office.

Eagle-eyed royal watchers believe Meghan re-wore one of her old wedding outfits, an off-shoulder navy blue dress and white hat with a navy bow, thought to have been designed by Stephen Jones.