Meghan Markle reportedly set to enter the world of cosmetics 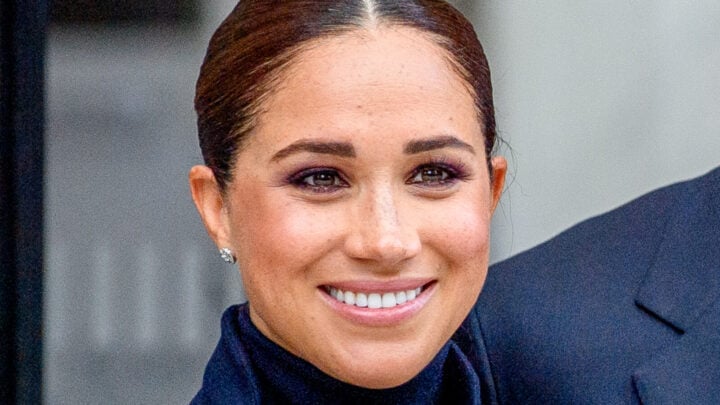 Meghan Markle is set to launch her own cosmetics line as rumours swirl after a visit to a beauty executive's estate. Source: Getty

Meghan Markle, Duchess of Sussex, has had a huge year. From her tell-all controversial chat with Oprah in March to giving birth to her second child in June, yet she’s far from slowing down, as she’s reportedly planning to release her own cosmetics line.

Meghan was spotted with her husband, Prince Harry, several times between February and March 2021, as they visited marketing executive, Bill Guthy at his home in Carpinteria, California. Bill Guthy is currently the co-founder of Guthy-Renker, a popular beauty marketing company, causing speculation for a first-time royal beauty release.

Rumours have swirled between royal fans and for a good reason, as both Meghan and Harry, were also seen flying on a private jet owned by the cosmetics firm during their recent trip to New York City on September 23, to pay tribute to victims of 9/11.

The pair met with New York Governor, Kathy Hochul, as they toured the 9/11 memorial pools and left in a Range Rover that took them back to the Carlyle Hotel on the Upper East Side.

Even before, but most certainly during, her royal stardom, Meghan has always stepped out in the most iconic beauty looks. Just recently on her trip to New York, she made quite the stunning appearance in an all-red, velvet power suit. She paired it with red heels and red sunglasses, with a touch of gold on her wrist to complete the look.

Not only was Meghan and Harry seen travelling from Mr Guthy’s estate, but another theory has been circulating that their bombshell interview with Oprah Winfrey earlier this year was actually filmed at his million-dollar ranch.

It felt like the entire world sat on the edge of their seats when the interview aired on March 7, 2021.

Two of the biggest surprises were revealed during the tell-all interview, as Meghan said there were palace “concerns and conversations about how dark his skin might be when he’s born.” More alarmingly, Meghan confessed to Oprah that she had suffered from suicidal thoughts and the palace refused to help.

But despite the mass controversy that followed the release of the Oprah interview, Meghan soldiered on and is now expecting to expand on her business ventures, continuing to inspire the royal fans across the world.

Would you buy from Meghan's cosmetics line?