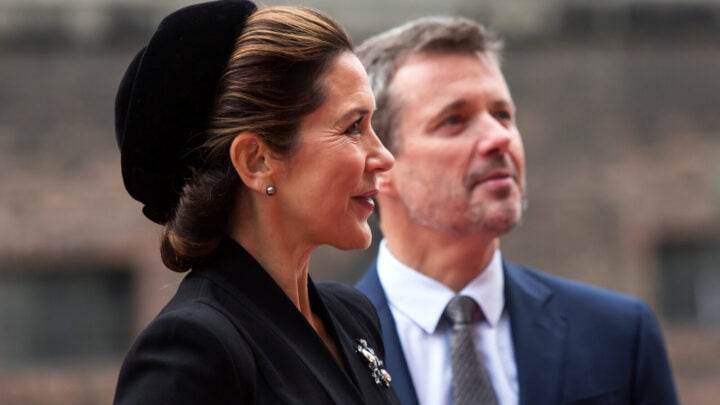 The Danish royal family attended the opening of parliament on Tuesday. Source: Getty.

Crown Princess Mary was the epitome of glamour on Tuesday as she stepped out alongside the rest of the Danish royal family to mark the official opening of parliament in Copenhagen.

The Australian-born royal opted for a sophisticated ensemble for the occasion, pairing a blush pink silk pleated skirt with a structured black jacket, which fastened around her waist with a simple belt. But the standout piece of Mary’s outfit was a classic black pillbox hat which sat just above an elegant chignon.

The queen’s sister Princess Benedikte was also in attendance yesterday and made a statement in a brightly coloured coat, paired with an eye-catching purple hat.

“When the clock struck 12.00, a new parliamentary year began today in the Folketing Hall at Christiansborg Castle, and true to tradition, Her Majesty the Queen and their Royal Highnesses the Crown Prince, Crown Princess and Princess Benedict’s attended first meeting [sic],” a statement on the Danish royal family’s official Instagram page read.

“According to the Constitution, the Folketing must open on the first Tuesday in October, and at the opening, the first item on the agenda is always to elect the chairman and deputy chairmen of the Folketing. Subsequently, the Prime Minister gave his opening speech.”

It comes less than a week after Mary’s last outing, when she helped pay tribute to inspiring and committed teachers at Denmark’s first-ever Teaching Prize awards, created by the Ministry of Eduction and Research. The new award is said to create awareness of the teaching role in higher education and to further inspire excellence in the field.

What do you think of Mary's look?