Gardening in style! Beaming Catherine towers in heels while playing with kids 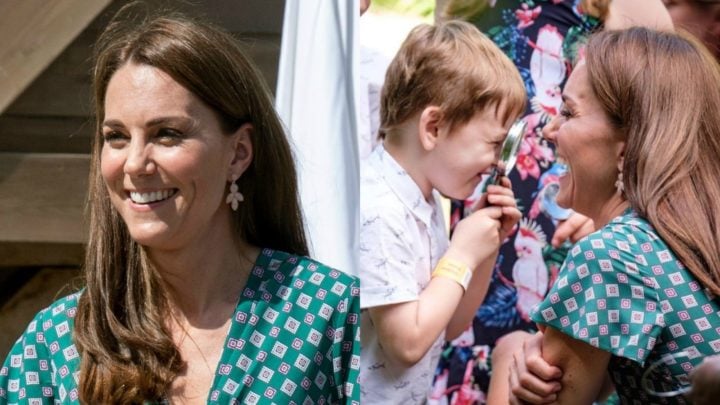 Catherine put on a very animated display on the outing. Source: Getty and Instagram/Kensington Royal (right).

She’s known for her animated displays on royal outings, often seen flashing beaming smiles and laughing with her guests.

And Catherine, 37, looked in her element as she showed her maternal side while welcoming a group of children to her garden re-opening at the Royal Hampton Court Palace Garden Festival – all while debuting a stunning summer dress and high wedge heels.

Refusing to let style hamper her play time with the kids, Catherine was seen bending down to the ground, chatting to them, holding their hands and even tackling the stepping stones with one little girl.

Wearing a below-the-knee green patterned summer dress, the Duchess of Cambridge stood out as she embraced the UK heatwave, while towering in beige and tanned wedge heels.

Greeting the children at the garden, the mum-of-three was seen laughing and happily chatting to each of the youngsters individually, before showing them all of the flowers and features in the garden – which has already appeared at Chelsea Flower Show this year.

At one point, the duchess stopped to chat to a little boy who looked delighted as he held a magnifying glass up to her face, before helping another girl make her way across the stepping stones – a feature inspired by her eldest son Prince George.

According to the Mail Online, Catherine spoke to Jake Catling, director of the Landscaping Consultants – the garden construction business which built the garden – afterwards and said: “I loved it. So many of them loved hopping over the stone and that’s so nice to see.”

He added that they’d included the pathway across the water specifically on George’s request.

“We made the stepping stones because Prince George wanted them. The kids loved jumping across it and it was down to Kate we got that in,” he explained.

At another point, Catherine was reportedly seen speaking privately to shy girl Khareesha James, eight, inside a den in the garden and speaking afterward, Khareesha told the Mail Online: “I am shy and she said that’s where she goes when she’s shy – in the tent.”

Kensington Palace explained that the event was “a picnic for her patronages” and the duchess was joined by “children from @afnccf, Evelina Children’s Hospital, @actionforchildrenuk and @_place2be to explore the garden and experience the positive effects of spending time outside”.

They added on Instagram: “The Duchess of Cambridge’s RHS Back to Nature Garden has transferred to @The_RHS Hampton Court Palace Garden Festival — the design has the same wild and natural feel but has been developed in order to create further opportunities for children and families to interact with nature.”

Catherine has launched the garden to enhance her ongoing work with Early Years, as she “believes that spending time outdoors plays a pivotal role in children’s future health and happiness”, the palace explained.

“Features like the hollow log and rustic dens have returned from Chelsea, in addition to a new hidden cave, treehouse, camo netting, rolling hill and stream. These environments enable children to develop skills for life through free play, building their confidence, strength, resilience and social skills,” the message went on,

“In addition to the physical and mental health benefits of being in nature, spending quality time with parents and carers outside has a valuable impact on children’s early development. In the garden, families can explore together and enjoy nature as a playground.

Read more: Catherine is gorgeous in summery frock as she receives new patronage from Queen

“There is a pond to paddle in, a bug hotel that provides habitats for all sorts of wildlife, as well as a bee-friendly wildflower meadow that covers the hill in meadow buttercup, ox-eye daisy, red clover and common spotted orchid.”

Do you find gardening can be good for mental wellbeing too? Are you a fan of Catherine’s work?