Duchess dubbed ‘Catherine the Great’ as she graces magazine cover 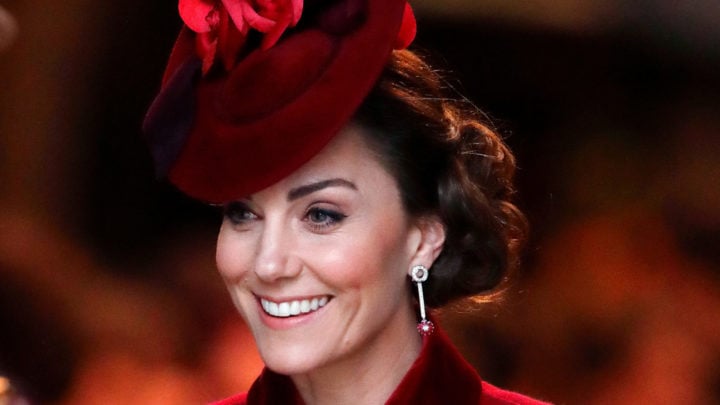 Catherine has appeared on the front cover of magazine Tatler. Source: Getty

The Duchess of Cambridge has been dubbed ‘Catherine the Great’ on the cover of iconic British magazine Tatler, making a striking appearance as the feature of an upcoming issue.

The mother-of-three cuts a stunning figure in a white ball gown for the July/August issue of the magazine, pictured on the red carpet alongside her husband Prince William. The issue promises to provide some insight into the royal’s life, speaking to courtiers, staff, friends and society figures about the duchess and her rise in popularity since marrying Prince William in 2011.

Her star is going stratospheric as the country looks to the monarchy for morale: HRH The Duchess of Cambridge is crowned Catherine the Great on the July/August cover. This spectacular issue is part of a new trial offer – 3 issues for only £1, including free home delivery and free digital editions. Because no one should have to go without Tatler. Click the link in bio for more.

Speaking about Catherine’s down-to-earth parenting and role as a member of the royal family, a friend of the duchess told Tatler: “Kate knows what the country needs and wants. Championing how to raise your children is perfect.” While another reportedly commented on her workload since Prince Harry and Meghan stepped down as senior members of the royal family, adding: “Of course she’s smiling and dressing appropriately but she doesn’t want this. She feels exhausted and trapped. She’s working as hard as a top CEO, who has to be wheeled out all the time, without the benefits of boundaries and plenty of holidays.”

Royal fans have expressed their excitement of Catherine being featured on the magazine, with many taking to social media to share their thoughts on the royal and her impact on the family. Some have described her as “the epitome of greatness”, while others have commented on her hard work and dedication to help the wider public.

“She is the true embodiment of class,” @labelle_michelle wrote on Instagram. “In all her time as a member of the royal family she has represented the monarchy, her causes and patronages with grace and deference. She knows that it’s not about her … she is a participant of the system that has prevailed for centuries and will continue in succession through her children, and even so, she manages to shine … that is the epitome of greatness.”

“Love her! Hard worker, respectable, genuine and very, very beautiful inside and out,” one user wrote. While another added: “Time and time again Wills and Kate have risen to the challenge to boost national spirit when it is most needed.”

And the fans are certainly right when it comes to her work ethic. While Catherine has been self-isolating at home amid the pandemic with William and their three children George, Charlotte and Louis, it hasn’t stopped her from helping others and contributing to the community. Catherine has dialled in for many video calls over the past couple of months and earlier this month, recently joined the likes of the Queen, the Prince of Wales, the Duchess of Cornwall, the Princess Royal and the Queen’s first cousin Princess Alexandra to pay tribute to hardworking nurses on International Nurses Day.

From The Queen and The Royal Family this #InternationalNursesDay: thank you.

The sweet video, which was released on the Royal Family’s official Instagram account, starts with Queen Elizabeth on a call. “This is rather an important day,” the Queen can be heard saying. “They have obviously had a very important part to play recently.”

Prince Charles then offered his thanks to nurses across the world, saying: “On this International Nurses Day, my family and I want to join in the chorus of thank yous to nursing and midwifery staff across the country and indeed the world. Thank you all so much for the diligence and courage that you have shown.”

While in another video call, Catherine and Sophie Wessex joined forces to speak to nurses in seven different commonwealth countries, including Australia, India, Malawi, Sierra Leone, Bahamas, Cyprus and the UK.

“I don’t know how you manage to do this and keep the show on the road despite the extra pressures you’re all under and the challenging conditions — it’s just shown how vital the role that nurses play across the world,” the Duchess of Cambridge said. “You should be so proud of the work that you do.”

Are you a fan of the royal family? What do you think of Catherine and her role in the family?