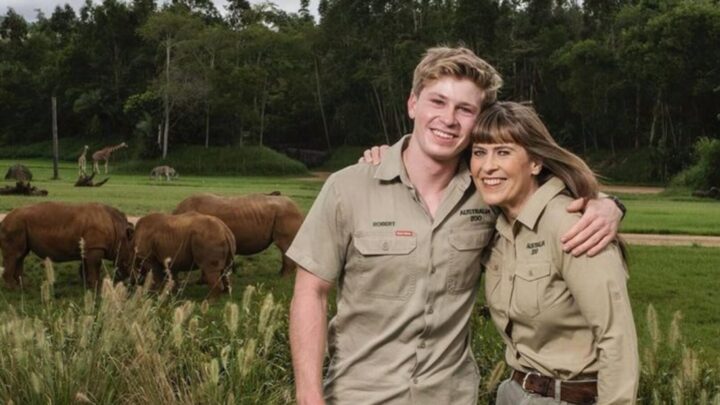 Robert admits his mother has always been the "force of nature" behind Australia Zoo. Source: Instagram @robertirwinphotography

Wildlife conservationist Robert Irwin became visibly emotional while reflecting on the strength and courage of his mother, Terri Irwin, in keeping the legacy of his late father alive “through some tough times”.

Appearing on ABC’s One Plus One on Thursday, September 29, the 18-year-old fought back tears as he discussed his mother’s decision to keep the family business going despite the difficulty she surely faced after losing her husband, Steve Irwin.

“She could have sold the zoo and just raised us. And we could have just squirrelled away and lived a little hidden life,” Robert said.

“She could see this legacy and knew that it could continue to grow and get bigger and better every single year and she did just that.

“She raised us. She kept the zoo going through some tough times. I get emotional just thinking about it. She’s an absolute wonder woman.”

Robert revealed that he considers his mother a “force of nature” who has been a driving force in the success of Australia Zoo, in the same vain as his father was before he passed away.

“Everyone saw dad as this larger-than-life character. Which he was in real life. 120 per cent every single day. But mum is the one who kept it going, it’s pretty special,” he said.

Robert also spoke of the respect he held for his mother, claiming it wasn’t until he reached adulthood that he was able to fully appreciate the “brave human she is”.

“I don’t think I really fully understood, fully grasped what a powerful human being and brave human being she is, and was, until I really started to kind of step into adulthood,” he explained.

“I realise now and only now what she has been through.

“I mean raising children, for mum to do that, without dad, to lose this sounding board and the person who you count on. I mean, the rug is just taken out from under you.”

Fans of the Irwin family and viewers of the Thursday night episode were moved by Robert’s emotional interview, with many taking to social media to remind Robert how proud they are of him.

Just watched Robert Irwin on One plus One on the ABC. What an amazing young man – mature way beyond his 18 years. Bravo!!

How impressive is Robert Irwin. What a champion bloke. #kurtfearnley #OnePlusOne

While Robert chose to reflect on the “wonder woman” that his mother is during his most recent interview, the two Irwin children recently chose to honour their late father for Father’s Day who passed away 16 years ago on the same day.

Both siblings took to social media to share throwback photos of themselves with the Australian icon, captioning each picture with a tear-jerking message.

Bindi, 24, shared a photo of her and her father on a late-night boat adventure.

“Grandpa Crocodile, I know you would’ve been the most incredible grandfather because you were such an extraordinary dad. Thank you for being an amazing guardian angel for Grace.” she captioned the photo.

Meanwhile, Robert shared a snap of his dad holding him as a baby, with a caption that read: “It’s Father’s Day today in Australia, and I am sending my love to those who are missing their dad today. I cherish all the good times with my dad and feel grateful to be able to keep his memory and legacy alive.”

Steve Irwin tragically died at the age of 44 on September 4, 2006, after he was pierced in the chest by a stingray.