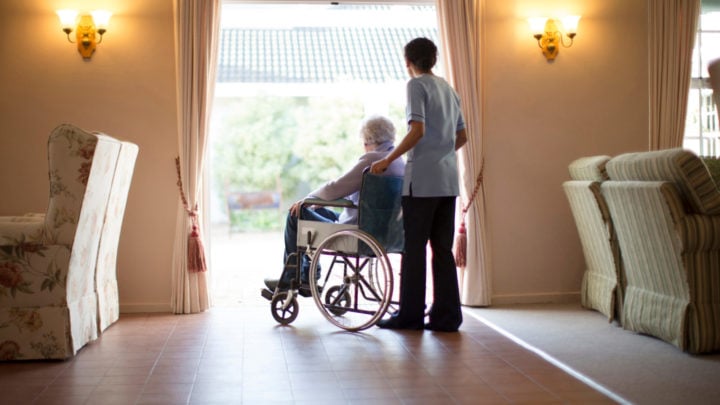 Majority of Aussies don't have a good idea of how residents are treated in aged care facilities. Source: Getty.

Australians of all ages would prefer to be assisted to live independently in their own homes  in later life, rather than move into an aged care facility, according to new research from the Royal Commission into Aged Care Quality and Safety.

The research was conducted by Roy Morgan between October 2019 and January 2020 and asked more than 10,000 Australian adults about their views on old age and aged care. Overall, the research found that almost everyone values older Australians and wants them to be properly looked after whenever they require support or care.

An overwhelming majority of people expressed a strong preference to remain living in their own home should they ever need support, with many revealing they’d like to downsize and move closer to family in retirement. Only one quarter of all older people that were surveyed said they would prefer to live in a facility should they need it.

“Australians want the government and community to assist older people to live well in their own homes for as long as possible,” they said. “The Royal Commission has been investigating how to achieve that.”

The large majority of older people who currently live independently said they enjoy happy, healthy and active lives. They do this by continuing to make lifestyle choices such as participating in regular exercise which helps them to stay independent and healthy.

The research also showed that there were a number of older people living independently who now require support with things such as shopping, cooking, cleaning and attending medical appointments. At this level, they preferred to receive support from family and friends rather than paid professionals.

Meanwhile, paid help from aged care facilities tends to be preferred by people who need higher-level assistance such as dressing, eating, going to the bathroom and nursing care. Most people thought that this type of assistance would be inappropriate or burdensome to leave exclusively to family.

Around 84 per cent of all adults have visited a residential aged care facility in their lifetime with the majority expressing a negative outlook on life inside the walls. According to the research, most people thought the residents were lonely, lacked control over their lives and just generally weren’t happy. They could however see they had access to medical care and were in a safe, comfortable and well-maintained accomodation.

There was also a divided response from the general community regarding topics like whether or not the residents got the help they needed, whether they were respected and whether they had enough activities to keep them occupied.

However, this criticism also came hand in hand with a lack of awareness about the aged care system from the general community. Only 9 per cent knew about My Aged Care, the government scheme that helps older Australians easily find information, get assessments and access services to aged care facilities, and only 4 per cent knew about the aged care regulator known as the Aged Care Quality and Safety Commission.

The commissioners argued that this lack of community knowledge helped to explain why past and present governments have failed to fix major, glaringly obvious systemic issues over the years. The Royal Commission’s interim report even showed there’d been 20 major inquiries made in the past two decades with many of the recommendations simply going ignored.

The Royal Commission into Aged Care Quality and Safety was established on 8 October 2018 in response to significant problems with aged care services that had been highly publicised in Australia. It now aims to look at the quality and delivery of aged care as well as the how ‘person-centred’ the system is regarding choice, control and independence.

Do you want to live out your old age in your own home or would you prefer an aged care facility?