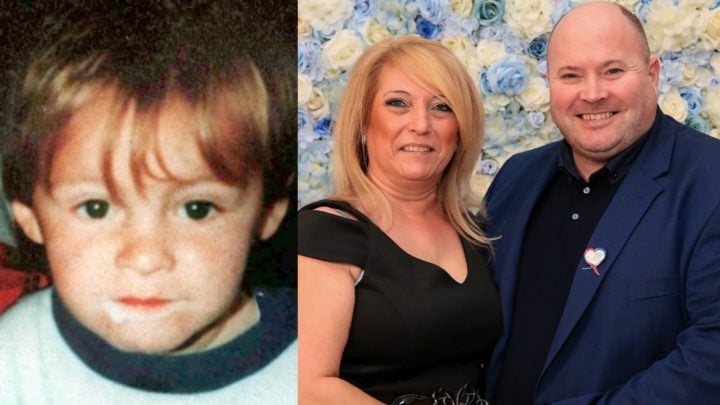 Denise Fergus - the mother of James Bulger (left) - and husband Stuart are set to become grandparents for the first time. Source: Getty.

Denise Fergus, the mother of murdered toddler James Bulger, has announced that she is set to become a grandmother for the first time, as her son Mikey, 26, is expecting his first child with partner Leanne McPadden.

Denise and husband Stuart shared the happy news on social media on Monday as the 52-year-old, who now runs a charity in James’ name, posted an image of an adorable sleep suit featuring the words ‘Baby Fergus’.

“My first grandchild is on its way. I couldn’t be happier,” Denise wrote alongside an image of the baby-grow, as well as three scan images.

Denise, then married to Ralph Bulger, was pregnant with Mikey at the time of James’ brutal murder in February 1993. The two-year-old was abducted and killed by Robert Thompson and Jon Venables, both just 10 years old at the time, in Bootle, Merseyside, in a crime that shocked and saddened the world.

Mikey was only one-year-old when his parents separated and the following year Denise met electrician Stuart Fergus, whom she went on to marry in 1998. The couple also share sons Thomas, 21, and Leon, 20, together.

Stuart also shared his delight at the prospect of becoming a granddad and congratulated Mikey and his partner Leanne McPadden. He wrote: “So proud to say @Denise_fergus and I are going to be grandparents for the first time.”

While many people congratulated Denise and Stuart on social media, with one person writing: “Massive congrats to you sweety.. You will enjoy every minute. I vote middle name to be James… Perfect.. If a boy of course.”

Another commented: “This truly is such lovely news, i hope your little grandchild brings you so much joy.” Another wrote: “I’m so utterly happy for you and your family. Just read it. Massive congratulations.”

While another user said: “Congratulations such brilliant news for you all. First time nanny myself in August can’t wait.”

Earlier this year, Denise paid tribute to her late son in an emotional social media post in honour of his 30th birthday, which he would have celebrated on March 16.

“As we approach your 30th birthday, we couldn’t buy you gifts or even have a party to celebrate,” she wrote on Instagram. “Instead we have to buy you flowers and balloons. We’ve done our best to make your resting place as beautiful as we can. Even after all these years it still hurts. The pain of losing you will never go away, James… you’ll always be a big part of my life. If I could just hold you one more time, I dont think I could let you go.”

Denise added: “I love and miss you with all of my broken heart. I know one day I will have you back in my loving arms. #HappyBirthdayJames“

Do you have grandchildren of your own?