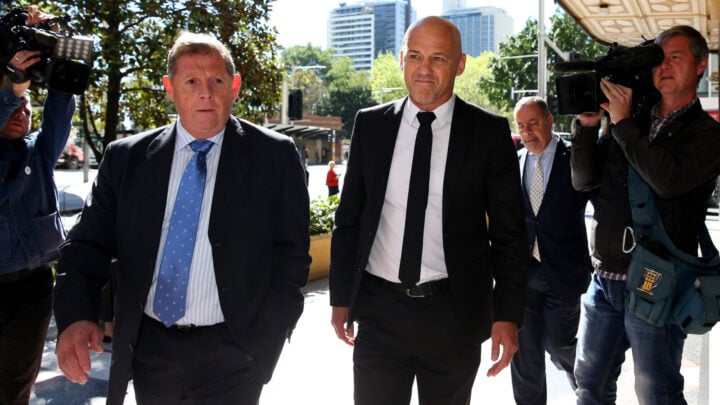 Jubelin denied claims that the charges were part of a "strategy" to put pressure on Spedding. Source: Getty Images.

Former detective Gary Jubelin has defended charging a former suspect in the disappearance of William Tyrrell, despite claims that the allegations negatively impacted the individual’s life.

William “Bill” Spedding was named a person of interest in the disappearance after visiting the home of William’s foster grandmother to repair a washing machine, only days before the three-year-old’s disappearance.

This led police to raid Spedding’s home and business in 2015 and later charge him over historical allegations that he had sexually assaulted two children in 1987, a court at the time found the claims had been fabricated and the children were allegedly “coaxed” into making the damaging statements.

Spedding spent 58 days behind bars before he was cleared of any wrongdoing and found not guilty of all charges in 2018. He is now suing the state of New South Wales and seeking damages for wrongful imprisonment and malicious prosecution.

Jubelin denied claims that the charges were part of a “strategy” to put pressure on Spedding regarding the disappearance of William Tyrrell.

“The evidence gathered by the police investigating that complaint or offence was sufficient to warrant that person being charged,” Jubelin told the court.

“As a police officer, if we uncover an offence and investigate that offence, we don’t have the autonomy to say we don’t prefer a charge.”

Jubelin conceded, however, that the charges did have a profound impact on Spedding’s life when pressed by Spedding’s barrister, Adrian Canceri.

“You would agree that, after he was charged with those offences, he was seen as a paedophile,” Canceri asked.

“I think that’s a fair comment, the amount of media attention on it, yes,” Jubelin replied.

During the cross-examination, Canceri cited a line from Jubelin’s book where the former lead investigator claimed he was “about to pull the trigger on a guy’s life”.

“It’s a fact, is it not, that you pulled a trigger on Mr Spedding’s life, in terms of charging him with the old historical sexual assault allegations?” Canceri asked.

Jubelin said that he doesn’t “rush into charging someone”.

“I could’ve worded it differently and made it more palatable,” Jubelin replied.

“I understand the magnitude of the charges; it’s not taken lightly.”

Fuller told 2GB Radio in November 2021 that the investigation was left in a “mess”.

“The investigation was looking at some persons of interest that were clearly not, and I think some time was wasted on that, and bushland is overgrown,” he said.

Jubelin was quick to defend the way the case was handled while addressing the criticism.

“I‘ve been watching and I give respect to the police. I know they’re in there. They’re trying hard,” he told 2GB Radio.

“I sit here very confidently and that’s why I take issue when I hear comments that the investigation was in a shambles when it was taken over.

“I rely on my experience along with my gut but I always defer to the facts.”

William Tyrrell vanished from his foster grandmother’s house in New South Wales on September 12, 2014. He had been playing in the front yard of the property in Kendall, and was wearing a Spider-Man suit at the time of his disappearance. Despite extensive investigations and an exhaustive search by hundreds of volunteers and emergency service workers, the then three-year-old has not been found.