“We can’t live here in hermit kingdom”: Covid-19 updates across the country 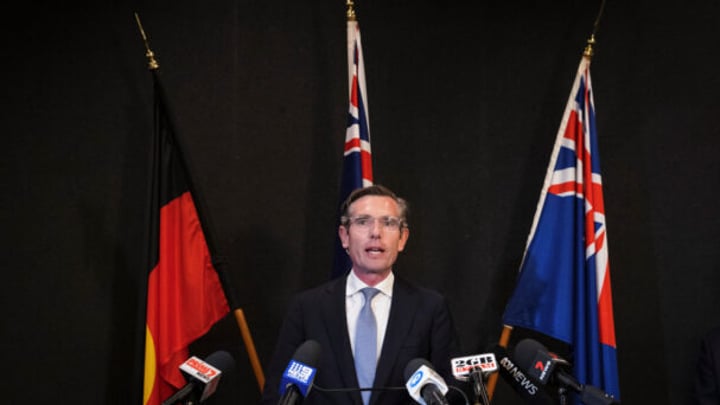 BREAKING: Tasmania has confirmed that it will enter a sharp three-day lockdown following a border breach by a Covid-19 positive Melburnian man on Tuesday. See our earlier update for further details on this.

#BREAKING: Hobart and southern Tasmania will be placed into a snap three-day lockdown from 6pm today #covid19tas

New South Wales has just announced that Quarantine for international arrivals will be ditched for November 1, 2021.

NSW Premier Dominic Perrottet asked where NSW CHO Dr Kerry Chant is today: “From time to time, I’ll make decisions in relation to the messages that I believe the public need to hear on different days with different announcements.” #COVID19nsw

In a press conference moments ago, Premier Dominic Perrottet announced that those who are fully vaccinated will not have to complete a two-week quarantine upon entering New South Wales.

This news comes just hours after New South Wales announced that there would no longer be entry requirements for those entering New South Wales from other states or territories, except Victoria.

This means that there would be no entry declarations required for those entering from any state, except Victoria. Victorians and those travelling from Victoria will have to complete an entry declaration, and must complete a 14-day quarantine.

Victoria has announced that it will not follow NSW’s lead in allowing international arrivals to skip hotel quarantine if vaccinated.

“We already indicated strong support for the home-based quarantine trials and we will move through those trials in a safe way”, Minister Martin Foley shared during this morning’s press conference.

ACT has today recorded 35 new cases, and has a total of 493 active cases. This is among the highest recorded totals ACT has recorded since the pandemic began.

Today, New South Wales has announced that those entering New South Wales from other states or territories will not be required to fill out an Entry Notice, except if entering from Victoria.

This means that there would be no entry declarations required for those entering from any state, except Victoria. Victorians and those travelling from Victoria will have to complete an entry declaration, and must complete a 14-day quarantine.

The Northern Territory has 7 active cases, none of these acquired within the NT itself. Great news.

Queensland has recorded no new community transmission cases today, and only two interstate or overseas acquired cases. Both cases pose no risk to the community.

South Australia has recorded zero new cases in the last reporting period, and have only 7 active cases. The state is 714.6 per cent fully vaccinated.

Hobart is preparing for a three-day-lockdown, to be announced at a press conference at 2.30pm AEDT, as a result of a hotel quarantine breach. The breach occurred on Monday or Tuesday when a man flew from Melbourne to Hobart without an appropriate border pass, and was found missing from his hotel quarantine room on Tuesday afternoon.

He was located at a residence in Bridgewater at 4.45pm on Tuesday afternoon, was transferred to a medi-hotel upon capture, and has since returned a positive test result for Covid-19.

Victoria has today recorded 2179 new cases of Covid-19, as the state braces for lockdown to be lifted on October 22. To read more about that, click here.

It’s been a big 24 hours across the country with new rules, relaxed rules, premiers in hot water, and premiers ignoring health orders.

ACT has announced 40 new Covid-19 cases today. This comes after yesterdays announcement of different restrictions for essential workers, including politicians and their staff. These restrictions will mean that all essential workers will be allowed to skip the mandatory 14-day quarantine period upon entering ACT, if they are double vaccinated.

On Thursday, new NSW Premier Dominic Perrottet announced that there would be a slew of changes to the NSW roadmap, notably, Chief Health Officer Dr Kerry Chant, was missing from the press conference. Dr Chant’s absence has led to intense speculation about a disconnect between Dr Chant and the new premier, with 9 News political reporter Chris O’Keefe reporting this officially on Twitter:

BREAKING: I have confirmed Dr Chant did not endorse this new roadmap. The Chief Health Officer warned the new Premier these changes come with risk, but the decision was ultimately a matter for the government. A shift from Perrottet away from “the health advice.” @9NewsAUS

In the last reporting period, only one case of Covid-19 was recorded in the Northern Territory. The case was detected in a person returning to Australia on a repatriation flight from Denpasar.

At 10am, Queensland Premier Annastacia Palaszczuk announced that Queensland had recorded a doughnut day, with zero new recorded cases. Along with this announcement, the premier announced that restrictions for Brisbane, Gold Coast, Moreton Bay, Logan, Townsville, and Palm Island will be wound back to stage three, falling in line with the rest of the state.

This means that restaurants and other venues will go back to having a capacity of one person per every two square metres, up to 100 people can gather in homes, and no limit applying to gatherings in public spaces.

Masks will continue to be mandatory in all spaces where socially distancing is not possible, and in venues until patrons have checked in via the Queensland Covid-19 app.

In a media release, Yvette D’Ath, Minister for Health and Ambulance Services, announced that the easing of restrictions has been made possible because of the hard work Queenslanders have done in “prioritising the safety and wellbeing of themselves and others”.

“Once again, we faced another Delta incursion and were able to beat it, but we all need to remain vigilant because COVID is still right on our border.”

Over the last reporting period, South Australia has recorded zero new cases, with the state being 53 per cent fully vaccinated.

Victoria has made a harrowing national record today, with 1838 new covid-19 cases recorded over the last 24 hour reporting period.

Furthermore, news is emerging that Victorian Premier, Dan Andrews has been caught flouting his own rules, walking from his car to the press conference yesterday on October 7, maskless.

This has led to a probe by the Victorian Police, as confirmed in a statement released on Friday, October 8. ABout lunchtime on Ocotber 8, Dan Andrews released a statement apologising for not wearing a mask.

An apology from @DanielAndrewsMP as he responds to the police investigation into my video (see my earlier Tweet). pic.twitter.com/lAQmrDpwzF

Victoria Police have announced that they have now fined Daniel Andrews $400, and he will pay the fine.

Western Australia’s firm border stance may be paying off, as the state records zero new covid cases over the last reporting period.

Wherever you are, stay safe and wash your hands!

Accurate as at time of publication.

What do these changes mean for you?