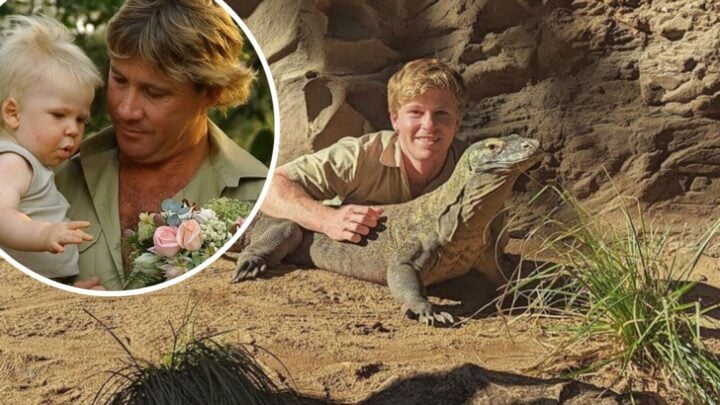 The late Australian legend Steve Irwin has left an incredible legacy behind, and his son, Robert Irwin, is determined to keep his father’s passion alive.

In honour of his father, the 18-year-old conservationist has launched his first-ever photography book, a project which he says was inspired by his father’s own passion for capturing nature.

Appearing on Sunrise, Robert revealed that on top of crocodile hunting, Steve was also “incredibly passionate” about photography.

“Not a lot of people knew this…my dad was an incredibly passionate photographer,” he tells hosts, David Koch and Natalie Barr.

“My dad had an amazing eye behind the lens, and not only was he there in front of the camera pushing that conservation message, but he was often behind the camera getting those shots, getting really close.”

Robert then went on to share the discovery that ignited his interest towards wildlife photography.

“I was actually cleaning out his own office, looking through some of the archives and found his own camera gear and I was stunned,” he recalled.

“I came to mum and said, ‘What’s all this amazing, professional photography equipment doing here?’. And mum [says], ‘That’s all your dad’s!’. He was the real deal, he had all the lenses, all the cameras.

“It’s a really special thing, and it meant a lot to me.”

Robert announced the release of his book titled Robert Irwin’s Australia in a video shared on his social media page.

“This is the embodiment of countless years of dedication to the art form of imagery as well as my profound passion to continue my father’s important legacy, while forging my own path,” the video announcement was captioned.

The young Wildlife Warrior has also said the book holds a special place in his heart as it “pays homage to his home (Australia), and encapsulates [his] journey behind the lens”.

Prior to announcing the release of his new book, Robert appeared on ABC’s One Plus One for an emotional candid interview about growing up being raised by his single mother, Terri Irwin.

Robert fought back tears as he discussed his mother’s decision to keep the family business going despite the difficulty she surely faced after losing her husband.

“She raised us. She kept the zoo going through some tough times. I get emotional just thinking about it. She’s an absolute wonder woman,” he said.

Robert revealed that he considers his mother a “force of nature” who has been a driving force in the success of Australia Zoo, in the same vain as his father was before he passed away.

Since Steve’s tragic death on September 2006, Robert and his older sister, Bindi, have continued to work tirelessly on continuing the legacy that Steve had created at Australia Zoo.