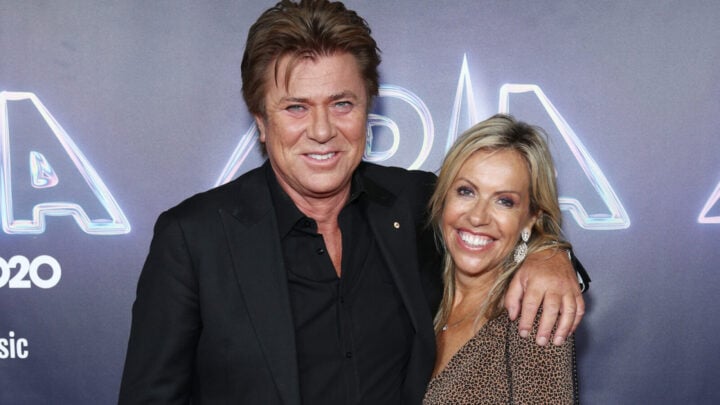 Richard Wilkins and Nicole Dale stepped out for the ARIA Music Awards in Sydney on Wednesday night. Source: Getty.

Richard Wilkins, 66, stepped out for the ARIA Music Awards in Sydney on Wednesday night, and while the Today Extra host has gone to many red carpet events over the years, it was his new girlfriend Nicole Dale who stole the show.

The blonde beauty looked incredible in a fitted, mid-length leopard-print dress, featuring three-quarter sleeves and a plunging neckline. She accessorised with black heels, a matching bag and dangling silver earrings.

This year’s ARIA Awards was a much smaller affair than usual, due to the ongoing coronavirus pandemic. Only a handful of celebrities and personalities attended the event, which was held at The Star casino.

“How good are a couple of days of fresh air, clean food and my first ever yoga class!!” the presenter wrote on Instagram at the time.

Many commented on the photograph, including radio and TV host Ben Fordham, who simply posted a string of love heart and fist-bump emojis. While fellow Channel Nine star Sylvia Jeffreys wrote: “Please tell me there [is] video footage of the yoga class.”

Fans also commented, with one user writing: “How cute are you two.” While another said: “Looking very happy and content. Enjoy.”

It comes eight months after the television star confirmed that he had parted ways with his partner of two years Virginia Burmeister. News of Wilkins and Burmeister’s break-up was confirmed in March, according to The Daily Telegraph, with Wilkins telling the publication at the time that they had split “some time ago”, and that the situation was “very amicable”.

Wilkins has been linked to a number of high-profile women, including former wife and mother of Richard’s son Christian, Michelle Burke, as well as Rebecca Gibney, Tottie Goldsmith, Collette Dinnigan (with whom he shares a daughter), and Anne-Maree Cooksley.

Did you watch the ARIA Awards last night?