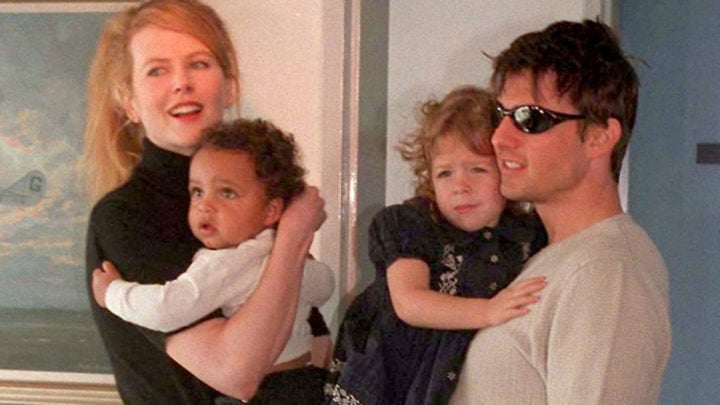 The former couple adopted Isabella and Connor, before separating in 2001. Source: Getty.

Nicole Kidman is famously protective when it comes to the privacy of her children, but the Oscar-winning actress has given fans a rare insight into the lives of adopted children Isabella and Connor, whom she shared with Tom Cruise before the A-list couple split in 2001.

Speaking to Vanity Fair, the 51-year-old Hollywood star revealed that daughter Isabella – known as Bella – is married and living in London, while 24-year-old Connor lives in Miami, Florida, where he worked as a DJ, before moving into Scientology’s international headquarters in Clearwater last year.

“We lived there for Eyes Wide Shut, Mission Impossible, and The Portrait of a Lady. They both had English accents when they were little.”

The Big Little Lies star also spoke about the daughters she shares with country music icon Keith Urban during the interview, revealing she is “unpopular” with Faith, eight, and Sunday, 10, as she refuses to allow them to have mobile phones or access Instagram.

“They don’t have a phone and I don’t allow them to have an Instagram,” she said. “I try to keep some sort of boundaries.”

Sydney-born Kidman, who has been married to the Parallel Line singer for 13 years, has previously spoken openly about her loving marriage. She added: “[It’s] extremely simple with what we want from each other and what we want from a relationship. Just peas in a pod in that regard.”

In November last year, the Aussie actress, who now lives in Nashville, discussed her children’s commitment to Scientology in an interview with Who magazine, insisting the pair were adults and could make their own decisions.

“I know 150 per cent that I would give up my life for my children because it’s what my purpose is,” she said. “They are adults… They are able to make their own decisions. They have made choices to be Scientologists and as a mother, it’s my job to love them.”

Are you a fan of Nicole Kidman? Do you think she is right to keep her children out of the limelight?